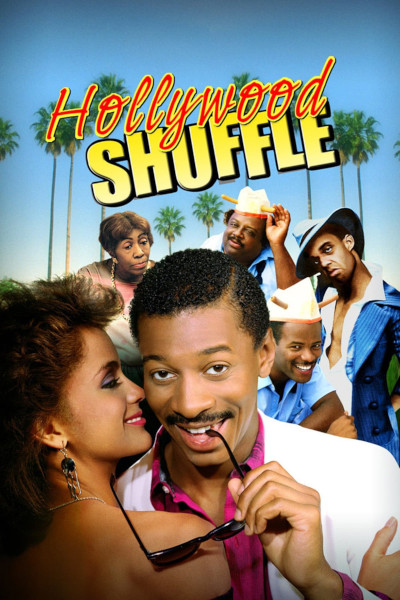 Aspiring actor and hot-dog stand employee Bobby Taylor (Robert Townsend) catches the ire of his grandmother (Helen Martin) for auditioning for a role in the regrettably titled exploitation film "Jivetime Jimmy's Revenge." When Tinseltown Studios casts Taylor in the title role, he has a series of conflicted dreams satirizing African-American stereotypes in Hollywood, and must reconcile his career goals with his desire to remain a positive role model for his little brother (Craigus R. Johnson).

“A comic with Second City, Robert Townsend got stuck in unsatisfying movie roles. Having appeared in A Soldier’s Story and Streets of Fire, he established himself as a decent supporting actor–but no more.

Townsend might have remained in that category indefinitely had he not had the audacity to challenge his fate. Raising $100,000, some as cash advance against credit cards, he co-wrote (with Keenen Ivory Wayans) and directed Hollywood Shuffle, based on his encounters on the job hunt.

The format, a series of daydreams and digressions, is based on a thin storyline. As a satire of black stereotyping, the film ridicules the whole industry–rude white producers, directors of black films, and TV critics like Ebert and Siskel. The humor derives from Townsend’s anger and frustration over the grotesque “choices” imposed on black actors.”