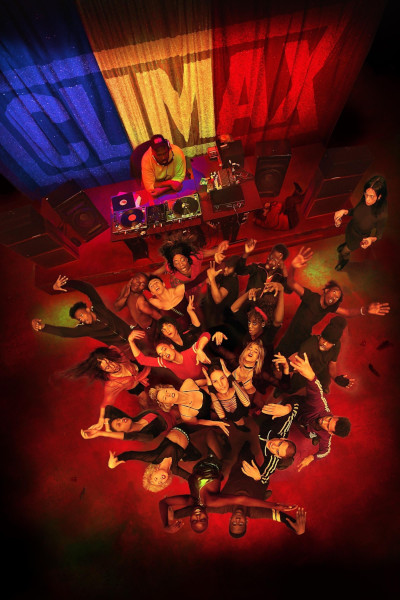 From director Gaspar Noé (Irreversible; Enter the Void; Love) comes a hypnotic, hallucinatory, and ultimately hair-raising depiction of a party that descends into delirium over the course of one wintry night. In Climax, a troupe of young dancers gathers in a remote and empty school building to rehearse. Following an unforgettable opening performance lit by virtuoso cinematographer Benoît Debie (Spring Breakers; Enter the Void) and shot by Noé himself, the troupe begins an all-night celebration that turns nightmarish as the dancers discover they've been pounding cups of sangria laced with potent LSD. Tracking their journey from jubilation to chaos and full-fledged anarchy, Noé observes crushes, rivalries, and violence amid a collective psychedelic meltdown. Starring Sofia Boutella (Atomic Blonde) and a cast of professional dancers, Climax is Noé's most brazen and visionary statement yet.

“​​It’s “Fame directed by the Marquis de Sade,” it’s “a typically confrontational cocktail of music and horror … dropped on its audience like the bucket of blood from Carrie,” it’s “Step Up meets Enter the Void” — these were a few of the creative descriptions of Gaspar Noe’s dance-dance-devolution epic Climax coming out of the festival circuit press over the past 10 months. For folks familiar with the filmmaker’s back catalog, the notion that the golden child of the New French Extremity has filled his latest film with sex, drugs, violence, self-mutilation, neon lights, long takes, formal audacity, informal taboo-tweaking and a credit reel brimming with fontsploitation is not going to seem shocking. The fact that he’s front-loaded the proceedings with some of most exhilarating musical sequences of the past few years, however, will inspire double takes.”