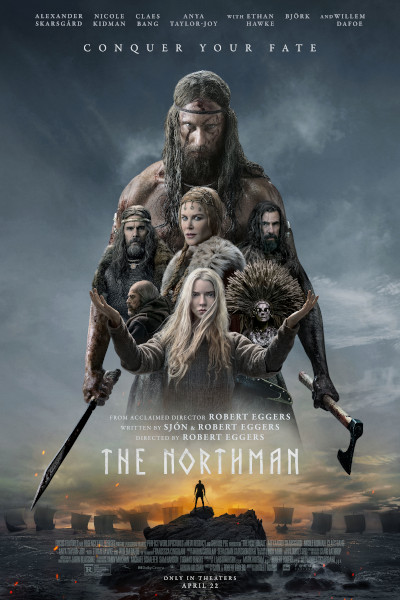 Get early access by listing yourself as "Going" on our Facebook event to be let in first at 6:30pm (promptly). https://fb.me/e/n4VAdElH9

Based on the Danish epic Gesta Danorum, The Northman is a tale of revenge, family, and bittersweet justice. After seeing his father, King Aurvandill (Ethan Hawke), murdered by the hands of his uncle (Claes Bang), young Prince Amleth (Alexander Skarsgard) flees his homeland. As he rows away from his native shores, he makes a solumn oath to avenge his father, liberate his mother (Nicole Kidman), and kill his tyrant uncle. Now as a man, Amleth is reminded of his oath by a mystic seer (Bjork), and unites with a cunning sorceress (Anya Taylor-Joy) to reap havoc on his uncle's corrupt rule.

"A gutsy piece of work, not only in the reach of its ambition but also in its willingness to show us actual guts." - The New Yorker

"A bloody revenge epic and breathtaking visual marvel, The Northman finds filmmaker Robert Eggers expanding his scope without sacrificing any of his signature style." - Rotten Tomatoes

"The Northman is magical, mystical and relentlessly masculine." - The Sun (UK)

"Praise the Norse gods, for not only is The Northman an exhilarating revenge saga that outdoes most modern blockbusters when it comes to action sequence staging and immersive sound design, but Eggers’ penchant for the strange remains fully intact." - SciFi Now