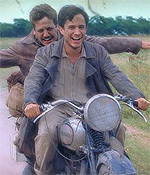 Before he was executed by a Bolivian firing squad in 1967, Argentina's Ernesto Che Guevara had become an icon of guerrilla warfare, a killer in a beret who celebrated hatred as the key to revolution. That image of Che has been co-opted by everyone from rockers to ad whores. But you won't find him in The Motorcycle Diaries, a mesmerizing look at an asthmatic, rich-boy medical student in the act of discovering his insurgent spirit.

The impetus for this enlightenment is a 1952 motorcycle trip that Ernesto (Gael Garcia Bernal), then 23, took with his biochemist pal Alberto Granado (Rodrigo de la Serna), 29. Jose Rivera based his script on the diaries both men kept of their eight-month trip through South America. Cheers to Walter Salles, the Brazilian director of 1998's Central Station, for keeping the focus intimate and thrillingly immediate.

A good part of the film's power is the way it sneaks up on you. The boys are sniffing out adventure, not an odyssey that will change their lives. For starters, they're riding Alberto's junk bike, a 1939 Norton 500 he calls the Mighty One. Salles gets terrific comic mileage out of the bike, especially when it breaks down and forces the guys to hitchhike or journey on foot.

It's the slowing of the trip that gives Ernesto and Alberto a chance to observe the starving workers and the politically oppressed they encounter in Chile, Peru and Venezuela. Whenever possible, Salles shot in the actual locations, letting us see what the protagonists saw, including the remnants of the Incan culture in Machu Picchu.