Searching for the Wrong-Eyed Jesus

Road-movie tour of the deep South 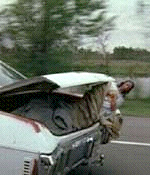 If David Lynch made a road documentary about the rural communities of the American South, it might look a great deal like Searching for the Wrong-eyed Jesus, Andrew Douglas' meditation on the nexus of music, poverty, and faith. Told with a minimum of dialogue, Douglas' documentary quietly unearths rough-hewn spirits of all kinds: in the rootsy folk/blues of its blisteringly talented musicians, in the alcohol of blue-collar bars that pepper the highways, and in the fire and brimstone of the region's home-grown religious faith, Pentecostal Christianity. Douglas sets his sights on the beautiful but harsh landscape, from the bayou country of Louisiana to the rocky foothills of Tennessee to the foreboding forests of Virginia. The entrancing cinematography is accompanied by what is, hands down, the best film score of 2004. Sitting next to the everyday people that Douglas often captures in their vulnerable moments are master roots musicians, including Johnny Dowd, The Handsome Family, 16 Horsepower, and Lee Sexton.

Harsh lives require harsh religions, and the explorations of Pentecostal faith are both eloquent and disturbing. Douglas, a British director of commercials working under the auspices of BBC Arena, naturally brings a cultural distance to an examination of The South that refines the film's wavering focus. The pervasiveness of religiosity is hammered home time and time again; under Douglas' watchful camera, even those hearty souls who reject the church and its teachings are unable to escape its reach. The fact that many of the participants in the film consider drinking a beer at a local tavern to be a virulent sin may stun more urbane viewers. As the inheritors of generations of poverty, religion has become the promise of more than an afterlife...it is the promise of a better existence. If these people speak in tongues, Douglas argues, who are we to say that God has not found them? (G. Shanks, Mixed Reviews)

Searching for the Wrong-Eyed Jesus