From the director of Amelie 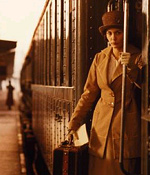 With the captivating A Very Long Engagement, director Jean-Pierre Jeunet performs close to a cinematic miracle. This grandly old-fashioned love story set against the backdrop of World War I marries graphic scenes of trench warfare with the gentle, playful wit of Jeunet’s Amelie. Sounds like a blueprint for disaster, right? Yet this ravishing, archetypal romance has such vitality and incandescent charm that it all comes together beautifully, without ever degenerating into kitsch.

Based on the novel by Sebastien Japrisot, A Very Long Engagement follows a determined young woman’s quest to find her fiance in the aftermath of World War I. In the seaside cottage she shares with her uncle and aunt on France’s Brittany Coast, Mathilde (Tautou) receives word that her beloved Manech (Gaspard Ulliel) perished at the front.

Despite eyewitness accounts of Manech getting strafed by machine gun fire, Mathilde refuses to believe that her childhood sweetheart is dead. She hires private detective Germain Pire (Ticky Holgado) to help her track down the surviving members of Manech’s company. Through their often conflicting accounts of that fateful day Manech supposedly died, Mathilde gradually draws closer to discovering the truth. It’s a journey fraught with potential heartbreak, yet Mathilde refuses to abandon hope that she’ll find Manech alive.

A Very Long Engagement is visually dazzling, with deep, rich colors evocative of the French Impressionists. Somehow, this alternately harrowing and whimsical film never feels disjointed. There’s never a moment in A Very Long Engagement where you get the sense that Jeunet is "winking" at the audience, as if to reassure them that he knows this sentimental story full of colorful characters is ripe for parody. Nor does he go the other direction and milk the pathos for maximum tearjerking effect. Jeunet instead carefully straddles the middle ground between these two extremes to create a film imbued with humanity and insouciant good humor. (T. Knight, Reel.com)