Cave of The Yellow Dog

From the Mongolian director of The Story of the Weeping Camel 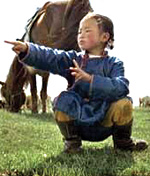 The film transports you to the gassy plains of Mongolia, where a nomadic family struggles to hold onto their ancient traditions in the face of encroaching modernity. Winner of the Palm Dog at the 2005 Cannes Film Festival. (T. Knight, Reel.com)

Cave of The Yellow Dog