A Flock of Dodos: the Evolution-Intelligent Design Circus 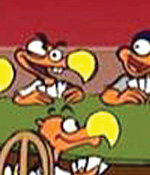 This documentary explores Evolution vs. intelligent design arguments in a (mostly) even handed, hilarious, informative fashion, but at the same time gives potent warning that the scientific community must play by a new set of rules. (M. Kandel, eFilmCritic)

A Flock of Dodos: the Evolution-Intelligent Design Circus