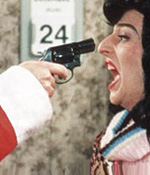 The lonely hearts hotline in Paris runs amok on Christmas Eve when a few unconventional and eccentric characters arrive on the scene causing one disaster after another.