The rare and mesmerizing surreal western 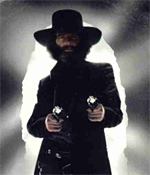