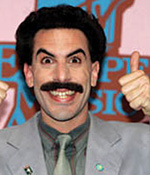 Crossing America in a repurposed ice cream truck and a shabby gray suit, mustache aquiver for the nuances of life in this grand old "US and A," Borat maneuvers himself into situations with average Americans -- feminists, churchgoers, frat boys, politicians -- and unloads one frag-bomb of political incorrectness after another. All he asks is that we show ourselves to him in our open-hearted, bigoted glory. And we do. Good Lord, do we ever. It is "Jackass" with a brain and Mark Twain with full frontal male nudity. (T. Burr, The Boston Globe)