An Evening with Michael Brown 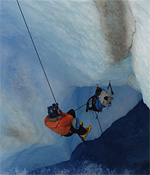 Capturing blind climber Erik Weihenmayer’s ascent of Everest is just one of the many accomplishments of filmmaker Michael Brown and Serac Adventure Films. Following selected clips and a conversation with the filmmaker, the BBC film Climate Chaos, directed by brother Nicolas, will be shown. Filmed in polar regions and other locations.

An Evening with Michael Brown