The Boxer and the Death 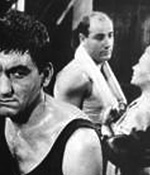 Focuses on a boxer who is accorded special privileges as a prisoner in a Nazi concentration camp because the camp's commandant was also a boxer before the war. A striking and well-crafted drama with heavy ironic and existential overtones. (Chicago Reader)

The Boxer and the Death