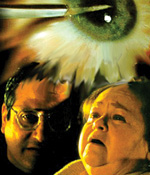 Bigas Luna was once considered the heir to Pedro Almodovar but his films never caught on with American audiences often because of bad luck (his beautiful The Chambermaid on the Titanic was sunk by the same-year release of Titanic). Here is his rarely seen ultimate movie-within-a-movie horror film.