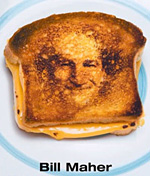 In Religulous, talking head Bill Maher lays out his views on religion. From the title you can probably guess what they are.

Religulous is a series of interviews, intercut with found footage and Maher's asides. In each interview Maher tries to shine a little skeptical daylight into the strange and sometimes harmful beliefs that people hold so dear.

When interviewing a former Jew turned Christian, Maher brings up the subject of Jonah and the whale, and whether the story is literally true. The Christian has no problem believing it, and eventually Maher loses it and laughs in disbelief "he lived in a fish??" Interviewing an Arkansas senator about the literal truth of the creation myth he gets to the same point of frustration and says "Adam and Eve, 5,000 years ago with a talking snake... come on, I mean this is my problem."

Back in the van where Maher analyzes the interviews for Larry Charles' camera, he riffs on the idea of a giant tuna as a spa for wealthy Japanese: 3 luxurious days and 2 relaxing nights in a giant fish. "When you come out you smell like pussy but it feels great."

Magic Mormon underwear, Scientology science fiction, and the literal belief in parables like the Jonah story may seem like easy targets; yet there's no shortage of people who believe unbelievable things. Some even think that there's something noble in it.

Some of the saner subjects in Maher's documentary are Catholics. He speaks with a priest with a great sense of humor who works at the Vatican Observatory (who knew?) who acknowledges that there is no science in the scripture because scripture predates science as we know it by 1,400 years. Another priest with an easy, nervous laugh agrees with Maher that an elaborate and ornate place such as the Vatican is pretty far removed from the Man who preached poverty and sacrifice.

But Maher doesn't go after only the easy targets. He looks at a full spectrum of unbelievable beliefs from the harmlessly silly, to the personally costly, to the downright dangerous.

Perhaps worst of all is an interview with a Muslim rapper in England; their conversation drifts to free speech. Maher tries to get the rapper to concede to a simple ground rule: that nobody should face death threats just because they wrote a book. But no, even that principle is up for debate; apparently sometimes religion still justifies -- to some people -- that murder is an appropriate response to words.

You shouldn't condemn Garrison Keillor for the crimes of Osama Bin Laden, just because they both believe that a god exists. Nevertheless, Maher is right to call attention to the weird things people believe. His film is a call to action for atheists, agnostics, and non-believers to not be so darned polite when it comes to religion. He wants us to have doubt, to question beliefs not backed up by evidence, and to not let religion get away with flawed logic and bad beliefs, just because it's religion.