Dawn of the Dead 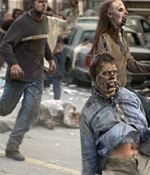 George A. Romero's "Living Dead" trilogy are some great movies. In addition to the thrills and the scares, there's some sharp social commentary. A film professor deconstructed them nicely for one of my classes, explaining how each film defined the decade in which it was created. He anticipated a Twilight of the Dead to tackle the 90s, but it never came.

Now, a new generation of filmmakers has discovered the fertile ground of Romero's zombie world, and we have Zack Snyder's freshman film, a remake of Romero's Dawn of the Dead, giving us an eye into the aughts.

By the time Ana (Sarah Polley) realizes something is wrong, it's already too late. She's a nurse who left the hospital before it got swamped by mysteriously bitten and mangled victims. Instead, she learns of the zombie plague firsthand, as she tries to help a neighbor girl, covered in blood. The girl bites her husband in the neck and before you know it, she's on the run from the zombies.

Zombie movies are great, because it doesn't really matter why there are zombies. The point is to ask what people might do when civilization has collapsed. Without all the amenities -- power, water, laws, armies -- how might people react?

The story can be re-told every decade because each generation has its own ideas about the nature of humanity. In fact, these movies should be remade every decade, as a sort of zeitgeist meter for future film and culture historians.

Some insights to get future film professors started:

Dawn of the Dead is one hell of a fun movie for horror fans. The two lead actors, Sarah Polley and Ving Rhames, have charisma to spare. The special effects (some gory, some explosive, some a little bit of both) were impressive enough to draw applause from my audience. We squirmed, jumped, and even laughed in all the right places.

As with the original film, there are some very funny moments. Romero had zombies emulating mallgoers of the 70s, trying out blood pressure machines and trying to look cool on the escalators. Snyder's version has a more sadistic sense of humor that works best when our heroes communicate via whiteboards and binoculars with another survivor, trapped on the roof of his gun store a block away from the mall.

Dawn of the Dead