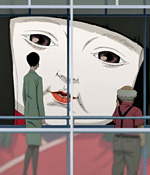 In Satoshi Kon's latest sprawling anime, the jumble of modern Japanese consciousness is a nightmare that threatens to take over the world through everyone's dreams.

A parade of appliances, Shinto icons, figures from Emaki scroll-painting and dime-store tchotchkes invades the sleep of victims, enabled by an experimental dream monitor that falls into malevolent hands.

If fantasy author Neil Gaiman were Japanese instead of British, you might mistake the idea for his. Nightmares are the ordinary made extraordinary, and Kon's adaptation of the popular Japanese sci-fi novel employs the same sharp, graphic-novel visuals and the fuzzy logic that is familiar to the universe of Gaiman's Sandman.

It's up to Dr. Atsuko Chiba, the research scientist leading the effort to develop the DC mini dream device, to find the culprit. She employs her dream alter ego Paprika, a fiery, up-tempo manga ingenue, to navigate within the dream world.

Who Paprika is, exactly, is never fully accounted for. She appears to function beyond Chiba's own consciousness and aids others in their self-analyses. She is, in some respects, an avatar who has exceeded the limits of the video game.

It is Paprika, for example, who brings homicide Detective Konakawa into Chiba's circle of phantasm fighters. The flinty, noirish cop is haunted by dream-pursuit clowns and acrobats, all with his own face, and transitions into action-movie genres that suggest trouble with his past.

Also aiding the effort is the device's inventor, a grossly obese, childlike genius. The jolly Buddha of a man had intended the DC mini as a therapeutic device before all had gone awry but is now shattered at the terrorism of invading other people's dreams.

The mind-blowing iconic imagery of Kon's surreal parade, in which geisha dolls emit screams that shatter glass towers and raccoons stumble holding bottles of sake, seems to comment on Japan's confused identity. In this way, it echoes Kon's "Millennium Actress," in which characters hopped between movies that represented Japan's history.

One has to draw from the film's visual feast what one can, as dream disjointedness mingles uncomfortably with a lack of adequate exposition. Like a nightmare, its story doesn't always make sense or cohere, especially at its city-smashing climax.

Despite the jumble, Kon's eye-popping, surreal mastery of the Japanese dream is awakening.