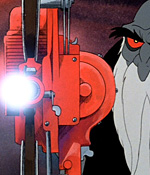 If you dread the day your child asks you where babies come from, then you definitely don’t want them watching Wizards. If you’re looking for an animated classic to watch with the kids on Sunday afternoon, revisit Bambi or The Fox and the Hound. Don’t let the PG rating fool you — Ralph Bakshi’s 1977 Wizards will have your kid asking you about stuff that is far more difficult to explain than “the birds and the bees.” However, if your kids are old enough to understand nuclear war, Adolf Hitler, the holocaust, assassinations, prostitution, terrorists, and the apocalypse, then they’re in for quite a thought-provoking treat.

Director/writer/producer Ralph Bakshi first made a name for himself when he created the first X-rated cartoon Fritz the Cat (1972) and its followup, the R-rated Heavy Traffic (1973). Ever since, Bakshi has continued to make seemingly anti-Disney films that offer consenting adults speculative — although unappetizing — food for thought. Wizards is rather tame compared to Bakshi’s previous animated features, but that’s not the say it isn’t just as disturbing.

Wizards opens as terrorists devastate Earth via nuclear war. Two million years later, radiation causes the remaining survivors to mutate into races of elves, dwarves, fairies, and other strange beings. The elves gather together and create a kingdom called Morganthar. The queen gives birth to two sons who become powerful wizards with opposite agendas; Avatar uses his magic for the good of others and becomes ruler of Morganthar, while Blackwolf does horrible things with his magic and exiles himself to a nuclear wasteland called Scortch.

Blackwolf desires world domination — of what little world there is left — and gathers mutants and demons from hell to serve in his army of darkness. However, the creatures have nothing to gain from their service, and do not work well as a team. Therefore, Blackwolf digs into world history and discovers information about war weapons and strategies, and finds that he can unite his troops through old film footage of Adolf Hitler.

The film’s dark themes are further developed through Bakshi’s fascinating — albeit gloomy — animation style. He paints a vivid portrait of the post-apocalyptic depression with a bleak palate of dark purple, black, gray, blood red, and navy blue, and seldom gives the audience relief from the disheartening atmospheric colors. At times, Wizards is even superimposed on doctored film (i.e. the animation plays against live action footage; rotoscoping is also used throughout the film), which gives it an exhilarating and frightening temperament. Although the film is never a joyous experience, thanks to Bakshi’s daring experimentation, Wizards is an animation maverick.

Nowadays, animated movies are crafted stunningly and entertainingly, but seldom have the courage to challenge our thoughts and uncertainties through avant-garde speculation. It is refreshing to experience films like Wizards that remind us how animated films can fill a niche in the filmmaking community. Wizards may not be everyone’s cup of tea, but it is an audacious refreshment that deserves appreciation and respect nonetheless.