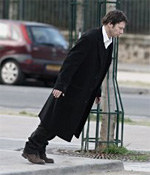 Nothing can sound more familiar, or more banal, than the subject of "A Christmas Tale," yet nothing could be more energizing, more captivating, more pure pleasure on screen than the passionate, evocative experience that has resulted.

It is Christmas weekend in the French provincial town of Roubaix, and three generations of a family are gathering under one roof to, yes, celebrate the holiday and endure each other. It's a family melodrama situation that has been done and overdone every which way but loose, but stifle those yawns: In the hands of writer-director Arnaud Desplechin this moribund conception comes to vivid and astonishing life.

Full credit for making the kind of film Hollywood would produce if it had the nerve, or the strength, goes to filmmaker Desplechin, highly regarded in France for films like "Kings and Queen" and "My Sex Life . . . or How I Got Into an Argument," but not as widely known here as he should be.

The gifted Desplechin, as "Christmas Tale" demonstrates, is drawn to powerful emotions and has a passion for finding new ways to tell stories, ways that expand the envelope of what is possible within the boundaries of traditional narrative.

What results is a captivating portrait of the most gorgeously fractious dysfunctional family. All the love and hostility, warmth and mistrust that inevitably flow from family functions is on display, as is the often maddening, always inexplicable complexity of the human nature we all share.

In achieving all this the director is helped mightily by his superb cast, engaged actors who fully embody their roles and who include such well-known names as Catherine Deneuve, Mathieu Amalric ("The Diving Bell and the Butterfly" as well as the current "Quantum of Solace"), Emmanuelle Devos ("The Beat That My Heart Skipped") and Chiara Mastroianni.

The actors in turn were energized by Desplechin's magnificent script, which not only has structural surprises but also displays the zest for self-aware language, for soaring verbal arias, that characterizes the best of the filmmaker's work.

"A Christmas Tale" begins with a brisk recap of Vuillard family history, focusing on the decades-past death of the family's eldest son, Joseph, from leukemia.

Now father Abel (Comédie-Française veteran Jean-Paul Roussillon) and mother Junon (Deneuve) are unsettled by the news that Junon herself has been struck by the same disease. A bone marrow transplant is her only chance, but as her three children and eldest grandson are tested to find out who is compatible, they are chastened by the knowledge that the transplant might end up killing instead of saving her.

Loved though she is, Junon is not the warmest of mothers, and her family has gotten used to her tart, occasionally disdainful opinions, such as her low regard for Sylvia, the wife of youngest son Ivan (Melvil Poupaud), a role deliciously cast with Mastroianni, Deneuve's real-life daughter.

Even more unhappy is daughter Elizabeth ("Diving Bell's" Anne Consigny), a successful playwright who is consumed both with worry about her fragile teenage son, Paul (Emile Berling), and with rage toward her ne'er-do-well brother Henri (Amalric).

Elizabeth has been so furious with her amoral hustler of a sibling and his truly impossible behavior that, five years in the past, she succeeded in having Henri banished from her sight at all family gatherings.

Amalric has been in four of Desplechin's eight films, and the bond he has with the director no doubt contributes to his standout performance here, "Christmas Tale's" most memorable despite heady competition. His alcoholic Henri is aware he is the most despised person he knows but believes with energetic conviction that not a scintilla of the opprobrium is justified. Henri drives everyone crazy, himself most of all, and Amalric's performance, perfectly pitched between comedy and tragedy, is so exact it's impossible to imagine this film without him.

Now circumstances conspire to bring the entire family together for the holidays, very much including Henri, who shows up with his bemused girlfriend, Faunia (Devos). And it's not only past grudges and Junon's illness that color the weekend but also unforeseen romantic complications, a heady mix that produces completely unpredictable results.

Not one to neglect any aspect of filmmaking, Desplechin has filled "A Christmas Tale" with variety, including characters talking to the audience, iris openings for the camera and type on the screen. But best of all is his way with the characters he's created. These infuriating, involving individuals are so resolutely themselves, so sure they are right by their own lights, they exist in a world beyond anyone's judgment. We hate to see their story end, not because these people are so happy, but because they are so human and so alive.