I Know Where I'm Going!

Headstrong Woman Plans to Marry for Money in Picturesque Romance 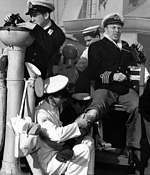 I'm slowly beginning to understand why Martin Scorsese loves Michael Powell and Emeric Pressburger so much. (He named two characters in his 1972 Boxcar Bertha after them.) Last year I checked out A Matter of Life and Death at the Castro, then rented the newly refurbished Peeping Tom on laserdisc. I recently found this wonderful little film at the new public library. It's my third, and now I'm a big fan.

It's actually pretty hard to find a movie that's a pure romance, as opposed to a romantic comedy (the box calls this movie a romantic comedy, but it's nothing of the sort). I Know Where I'm Going! is the story of a headstrong woman (Wendy Hiller) who goes off to a beautiful Scottish isle, Kiloran, where she plans to marry one of the richest men in the world. She just about gets to the island when bad weather sets in and no one is able to take her across the water on the final leg of her trip. So she must wait on the mainland in a beautiful little Scottish village with a sailor (Roger Livesey) who happens to be home on leave, and who is also heading for Kiloran. A storm comes up, and they must stay at the home of a friend ( Pamela Brown, whom Powell was in love with -- and it shows) until it blows over.

You know what's going to happen, but Powell and Pressburger are expert storytellers and handle the situation well. They let the movie unfold as it will, taking its time. They don't bring up any unnecessary subplots about evil Nazis bent on destroying true love. It's an amazingly beautiful movie to look at, both in its set design and in its photography. Powell and Pressburger seem to have been influenced by Citizen Kane, which was a highly unpopular film in England at the time. A lot of the shots even look like Welles signature shots; low angles, deep focus, and use of shadows.

The film also hinges on superstition for part of its poetry. One of the key images is an old Scottish castle that is supposed to have a curse on any member of the sailor's family. The notion of otherworldly forces fits in very snugly and naturally in this film. The film is asking you to believe in superstition the way you would believe in true love. The film has magic woven into it, as in the scene at the beginning where the gentlemen's top hat turns into a train smokestack.

This is a great film.

I Know Where I'm Going!