Director Casts His Parents in a Present-Day Peter Pan Tale 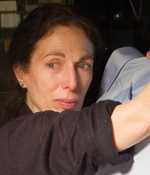 Cluttered with beautiful junk and crammed to the rafters with feeling, “Momma’s Man” is a touchingly true film, part weepie, part comedy, about the agonies of navigating that slippery slope called adulthood. It was written and directed by Azazel Jacobs, a native New Yorker who has set his modestly scaled movie with a heart the size of the Ritz in the same downtown warren where he was raised. Being a child of the avant-garde as well as an A student, he cast his parents, the filmmaker Ken Jacobs and the artist Flo Jacobs, as the puzzled progenitors of his centerpiece, a wayward son of bohemia, Mikey (Matt Boren).

In American movies, growing up tends to be a job for either Aryan Youth types or the oddballs and outsiders who, long a staple of both sitcoms and the Sundance Film Festival, have migrated to big Hollywood in droves. But growing up Apatow style just means learning to divide your attention between your joystick and the little lady who loves you just the way you are, flab and all. Real life is harder, as is real art. The younger Mr. Jacobs, who has spent the last decade or so learning how to make better and better films, with a handful of shorts and two worthy features, takes a generally unsentimental view of his blobby big baby. Mikey may get down on all fours and crawl on the floor, but the filmmaker never pampers him.

Episodically structured, “Momma’s Man” catches the rhythm of life through drifty interludes, fragmented exchanges and moments so delicate they would break in rougher hands. Shortly after the opening credits, Mikey, who had been visiting his parents during a winter trip, decides not to return to his wife and infant in Los Angeles. Instead he returns to the parental loft and, mumbling something about the flight, crawls into his old lair. There, in a corner aerie overlooking Chambers Street, he sinks into childhood: he rummages through grubby trinkets and treasures, ties a tiny superhero cape around his neck (almost as if he hoped its lightning bolt could give him a jolt) and buries his nose in comic books.

You don’t need a couch and a degree nailed to the wall to figure out that Mikey is suffering from a sudden case of regression. Though that much is obvious the moment he returns to the loft, creeping under its blanketing shadows, not much else about him is. With his sad moon face and small Buddha belly, he looks like a middle manager who got off at the wrong subway stop and somehow wandered into the 1960s. He’s a straight arrow in a quiver full of zigzags and so seemingly out of place that it’s both a wonder he ever fit in the loft and no surprise when he starts stripping off his clothes. Eventually he’s stumbling about in long underwear, like an overgrown toddler.

With its few locations, small cast and limited budget, “Momma’s Man” looks deceptively humble. But Mr. Jacobs has succeeded at one of the most difficult tasks given a director, which is to make a character come alive through the filmmaking, not exposition. Mikey dissembles freely, though he never explains what he’s going through as he dodges in and out of the loft, evading his wife’s calls and his father’s searching eyes. Mr. Jacobs gives his actors words they can use, not dialogue to chew, as in the hilarious-horrible scene in which Mikey hides inside the bathroom while his mother tries to ease his pain with a maddening litany of maternal comforts — cereal, tea, coffee — yet somehow forgetting the breast milk.

As Mikey roams around the loft, nibbling at food, scratching his rear, telling another lie to his wife, he goes deeper, as does the film. He’s at ease in this space, part tomb, part womb, and almost swallowed up by it. There are times when he seems lost amid its disorder, adrift in a secondhand shop crowded with bric-a-brac, toys, paintings and an upright piano, film reels, cans and projectors. (Is he collecting or a collectible?) In one startling scene, Mr. Jacobs casually (carefully) positions him next to the head of a doll resting on a shelf, a juxtaposition that makes the character look as if he were inside a Joseph Cornell box, another precious relic in a fetishistic assemblage.

There’s something haunting about this moment, partly because Mikey seems so colorless alongside all this glorious stuff. “Momma’s Man” is an extraordinarily tender film — Mr. Jacobs and his camera dote on his parents — but it’s more complex than the valentine to Mom and Dad I originally had it pegged as when I first saw it at Sundance. From some angles the loft comes across like a phantasmagoric playground, but it doesn’t appear to offer a lot of room to stretch, much less to grow. Yet, as the repeated two-shots of his parents imply, Mr. Jacobs is also acknowledging a simple truth about parents and children too rarely broached in American movies, particularly in an indie scene enslaved by juvenilia: There’s more to your parents than you.

There may be an autobiographical slant to this dynamic, but to harp on the similarities between the man calling the shots behind the camera and the melancholic trying to break free in front of it would miss the point. Like any artist, Mr. Jacobs has shaken down life for what it can give him. That life includes his parents, who belong to a generation of Manhattan artists who have become as exotic as the last of the Mohicans. These are people who helped create not just a child but also a world. In “Momma’s Man,” Mr. Jacobs honors both. “A dewdrop can reflect the universe,” the Soviet filmmaker Alexander Dovzhenko is supposed to have said, which is as perfect a summation of this lovely film as I can imagine.