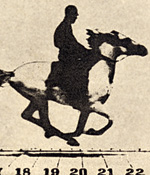 A two-day symposium and discussion in honor of the late experimental filmmaker Stan Brakhage that will explore moving visual art in the past, present and future. Steve Seid will curate the Saturday program and Mark McElhatten will curate Sunday.