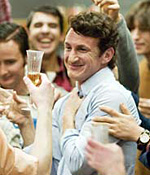 At the heart of every biopic lies an intractable conundrum: How do you remain faithful to the historical facts of your subject's life without turning that life into a stodgy historical pageant of the sort parodied in last year's Walk Hard? (John C. Reilly's rock-star hero meditates with the Beatles in India: "That was freaking transcendental, Paul McCartney. Don't you agree, John Lennon?")

There are many ways of approaching the Biopic Problem. One is to make an avant-garde film that only indirectly addresses the life of its subject, like Todd Haynes' off-kilter Dylan bio I'm Not There. Another is to embrace stiff biopic-ishness with open arms, like Oliver Stone's recent W., whose straight-from-the-headlines literality had its own clunky charm. But with Milk (Focus Features), the story of martyred gay rights activist Harvey Milk, Gus Van Sant and screenwriter Dustin Lance Black pull off something very close to magic. They make a film that's both historically precise (allowing for a few compressions and ellipses, Milk follows the same arc as Randy Shilts' biography The Mayor of Castro Street) and as graceful, unpredictable, and moving as a good fiction film--that is to say, a work of art.

Movies about real-life good guys who we know will get it in the end tend to bend inexorably toward the arc of that fatal moment: the booth at Ford's Theater, the intersection in Dallas. It's not that Milk never falls victim to biopic-itis: Near the beginning, Van Sant provides exposition with a newspaper-headline montage detailing Milk's 1978 assassination at the hands of a fellow member of the San Francisco Board of Supervisors. But the film then shifts back in time to build up a character so vibrantly and specifically imagined that we forget to define Milk by his death. Which is, no doubt, how Harvey Milk would have preferred it. In recent years, Sean Penn has been condensing into a black hole of an actor--his performances in Mystic River and All the King's Men were so studiedly "powerful" that they swallowed up the surrounding movie. But his portrayal of Harvey Milk is restrained, nuanced, and, most of all, light--it's nice to see Penn play a character of Spicoli-like sweetness and openness, rather than the glowering lugs that have become his specialty. That's not to say that Penn's Harvey is an angel; his obsession with his own political career eventually drives away his beloved Scott, and his next romance, with a needy Mexican drama queen named Jack Lira (Diego Luna), is a study in passive-aggressive pathology.

Luna is perfectly cast, as are the other young members of Harvey's admiring coterie, an insular clan of activist foot soldiers that includes a startlingly transformed Emile Hirsch as hustler-turned-protege Cleve Jones. The scenes in which these cute boys huddle over electoral maps, wildly strategizing about redistricting rules, have a loose, anarchic energy that feels like a real campaign in progress. Later, the boys' catty reception of Alison Pill as Harvey's new campaign manager points to a not-so-distant time when gay men and lesbians saw their political interests as mutually exclusive.

Josh Brolin has rocketed in one year to the top rank of American actors. He plays the granite-jawed, secretly rageful, possibly closeted Dan White with such compassion that it's easy to forget he's the bad guy. In the movie's heartbreaking last scene, shots of the actors merge with real-life footage of a candlelight vigil on Castro Street the night of Milk's death. Ending a biopic with archival footage was a concession to convention on Van Sant's part, but in the wake of California's passing of Prop 8 (and the 30th anniversary of Milk's death), this convergence of past and present feels more appropriate, and sadder, than ever.