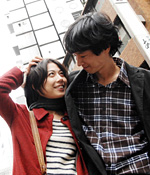 Two Frenchmen and a South Korean make a great deal of mischief in "Tokyo!," an uneven but enjoyable trio of films that take affectionate (and sometimes literal) aim at the Japanese capital. Fittingly enough, horror and sci-fi rep the primary building blocks of these Tokyo stories, though the ingredients aren't always doled out in the proportions one would expect from filmmakers Michel Gondry, Leos Carax and Bong Joon-ho. Their names should secure the witty omnibus a place on the shelves of cinephiles and genre buffs after a solid fest life and limited theatrical release through Liberation Entertainment.

Like a nastier Eastern sibling to "Paris, je t'aime," "Tokyo!" reps a playfully ragged attempt to capture (and skewer) the multiple shifting identities of its eponymous city.

First and arguably best of the bunch is Gondry's deviously titled "Interior Design," which opens on a dark and stormy night as young, self-deluded aspiring filmmaker Akira (Ryo Kase) and his supportive but directionless g.f. Hiroko (Ayako Fujitani) arrive in Tokyo. Hiroko's attempts to find them an apartment (experiencing firsthand the surreal horrors of low-end Tokyo real estate) leads only to frustration, as does her search for a job.

Akira says early on that people define themselves by what they do, a maxim that takes on startling new meaning when Hiroko undergoes a bizarre but not entirely unwelcome transformation. Gondry handles the light intrusion of Cronenbergian body-horror with minimal f/x and old-fashioned visual sleight-of-hand, keeping his camera focused on Fujitani's engaging performance. The Gallic helmer may have a reputation for dazzling directorial whimsy, but his restraint pays off here in a work at once poignant and slyly Kafka-esque.

Less subtle in moniker and execution, monster-movie parody "Merde" may prove the most intriguing offering to viewers, as it's Carax's first film since 1999's "Pola X." Taking a page from "Godzilla" and its countless cine-spawn (and perhaps paying tribute to fellow helmer Bong's "The Host"), Carax unleashes a hideous, Gollum-like humanoid (a freakishly made-up Denis Lavant) from the sewers onto the cosmopolitan streets of Tokyo.

After wreaking some mild havoc (followed by some explosive references to Nanking that crystallize the pic's return-of-the-repressed subtext), the creature is captured and interrogated by the authorities, his guttural ravings decipherable only by an eccentric French attorney (Jean-Francois Balmer, having a ball). Merde, as this terrorist calls himself, baldly indicts the people of Japan as "disgusting" (a bit rich, given the source), though the ending suggests future cities are ripe for harassment.

Engaging any number of satirical targets, from the amusing politesse of Japanese news anchors to the culture's willingness to turn anything and everything into a mass-marketed phenomenon, "Merde" is the collection's roughest-looking and most thematically barbed effort -- which makes the beguiling simplicity of Bong's "Shaking Tokyo" all the more welcome.

Teruyuki Kagawa (also appearing in Un Certain Regard selection "Tokyo Sonata") plays a self-described hikikomori, or shut-in, who hasn't left his apartment in more than a decade. It takes a visit by a beautiful pizza delivery girl (Yu Aoi) and a random earthquake to lure the hermit out of his cave, whereupon he finds he's not the only agoraphobe in town.

Deploying smooth, supple camera movements that capture the flat's warmly lit and impeccably maintained interiors, as well as wider establishing shots of the city, Bong and d.p. Jun Fukumoto effortlessly pinpoint the sense of isolation that so often permeates even the world's most densely populated metropolitan centers. Mild sci-fi inflections aside, "Shaking Tokyo" finds one of South Korea's most creative talents working in a delicate minor key. Some viewers may want more Bong for their buck, but it's a lovely sorbet with which to end a piquant three-course meal.