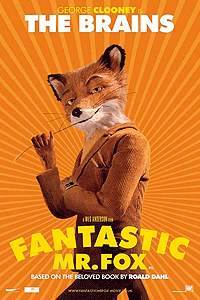 Who'd have guessed it? Wes Anderson, creator of the rascally stop-motion fable Fantastic Mr. Fox, turns out to be born to make animated films. I say that with a bit of mischief, because I'm not a big fan of Anderson's work (Rushmore, The Darjeeling Limited). What I now understand, though, is that in essence, he's always been making cartoons; he just confused the issue by putting real live actors in them. Before, he twisted reality into a permanent ironic pose. Now, in the infectiously primitive talking-animal world of Fantastic Mr. Fox, he's become an ironic realist.

Freely adapting Roald Dahl's 1970 children's book, Anderson creates an endearingly tactile fairy-tale thrift-shop universe, with quaintly painted backdrops, cotton balls for smoke, and a family of foxes who move in such deliberate fashion that, up close, you can see the hairs on their faces bristle and jerk. Yet Mr. Fox (voiced by George Clooney), Mrs. Fox (Meryl Streep), and their son, Ash (Jason Schwartzman), inhabit a world that's disarmingly, well, lifelike. There are jokes about flipped real estate (they move from a hole to a tree — i.e., an upscale condo), plus a very unchildlike soundtrack powered by the Beach Boys and the Rolling Stones. As a hero, Mr. Fox has the arch selfpossession to insist to his wife that he poaches poultry ''because I'm a wild animal.'' Against her wishes, he plots to rip off a trio of evil farmers, and the film turns into a modly surreal, undergroundburrowing heist yarn, with Clooney as self-mockingly sympathetic as he is in the Ocean's films. With its virtuoso tomfoolery, Fantastic Mr. Fox is like a homegrown Wallace and Gromit caper. To Wes Anderson: More, please!