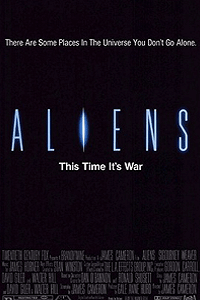 This is the rare sequel that successfully builds upon the raw ingredients of the original work. James Cameron, riding on the success of THE TERMINATOR, ups the ante on various fronts and delivers the goods.


Fourteen years before Titanic (1997) swept up eleven Academy Awards, a thirty-year-old James Cameron locked himself up for four days in 1983 to show 20th Century Fox that he had what it took to commandeer Alien, the 1979 Ridley Scott sci-fi blockbuster, and take it to the next level. In those four days Cameron listened to nothing but Gustav Holst's composition for "The Planets Suite," subsisted on a steady diet of junk-food, and in this time produced a treatment for Aliens (1986) that was 45 pages long and single-spaced. Cameron had also been working on other projects around this time that would help nurture his place as the next mid-wife to the Alien mythos; 1984 saw both Rambo, for which Cameron wrote the script, and The Terminator, which he directed, become surprise hits. These successes helped Cameron and then-wife and producer Gale Anne Hurd find themselves working in London and giving birth to an $18 million dollar science-fiction/horror film that was destined to grace a 1986 cover of Time magazine and win two Oscars® for Best Sound Effects Editing (Don Sharpe) and Best Visual Effects (Robert Skotak, Stan Winston, John Richardson, and Suzanne M. Benson). Aliens also garnered five other Oscar nominations for Best Original Score (James Horner), Best Film Editing (Ray Lovejoy), Best Art Direction-Set Decoration (Peter Lamont, Crispian Sallis), Best Sound (Graham V. Hartstone, Nicolas Le Messurier, Michael A. Carter, Roy Charman), and one for Best Actress in a Leading Role (Sigourney Weaver). Aliens would go on to gross over $180 million dollars worldwide, ensuring that Ripley's outer space nightmares would continue for many years to come.

With the first Alien, writer Dan O'Bannon wanted to transplant elements from his early collaborative work with John Carpenter in the comedic student film Dark Star (1974) into something serious and bleak. Roger Corman was interested, but then the Brandywine production team at 20th Century Fox, which included Walter Hill, glommed onto it with a special interest that was sparked by anything sci-fi thanks to the success of Star Wars (1977). When Ridley Scott was paired up with Swiss surrealist H.R. Giger to work on what would become one of cinema's most famous monsters, what was originally assessed as a B-movie outing soon was transformed into an A-list release. As Toby Young, writing for The Guardian (8/20/92) notes: "Giger was approached by screenwriter Dan O'Bannon at the film's inception, and it was his illustrations of H.P. Lovecraft's demons in his book Necronomicon which convinced 20th Century Fox to finance the project. Giger brought his obsession with female genitalia to every aspect of the film's design, at one point causing the crew to fall about with laughter because the design he'd just unveiled was 'lovingly endowed with an inner and outer vulva.'" Small wonder, then, that much of the ensuing production would find itself lathered, literally, in K-Y Lubricant Jelly (just in case you were wondering what all that squishy, alien drool was made of). Such designs, along with whatever baggage O'Bannon brought to the table as a scriptwriter, and Young, who was reminded of "a horrific sexual experience he'd once had," all helped configure the first Alien experience as a true Freudian nightmare where all sexual signifiers are turned inside out and made truly threatening to the order of things. What's interesting is how this order (aside from Scott's voyeuristic portrayal of Weaver in undies at the end of the first film), is refreshingly far from the patriarchal norm seen in most Hollywood films. Aside from the fact that Weaver's heroine survives well past all her male compatriots, the original impetus was gender-blind because in early script form everyone had assumed Ripley was going to be a man and only later was it clear, thanks to inspired casting, that Sigourney Weaver would be given the lead. Her role was greatly expanded by Cameron in Aliens, and Weaver's influence further increased when she became the producer of the next two films that followed.

For the Time magazine cover article (July 28, 1986), Richard Schickel fawningly promotes Aliens as an improvement over the original in part due to the introduction of a traumatized child, Newt (played by Carrie Henn); "The first film had merely mobilized Ripley's basic fight-or-flight instincts. The presence of Newt allows her to discover stronger, higher impulses, gives her positive rather than negative emotions to act upon. The audience too has a much stronger rooting interest in Ripley, and that gives the picture resonance unusual in a popcorn epic." Cameron himself admits to trying to pay respect to Ridley's original aesthetic by making sure to fill the scenes with plenty of smoke, backlights, textures, crowded frames, and personable characters, but admits to then veering his focus toward issues relating to parental love, protectiveness, and a sense of duty.

The other significant permutation from Alien to Aliens occurs with the shift from a progressive and liberalistic paradigm in Alien, where working-class grunts are the primary focus as their numbers are thinned down in a slow boil, to a slightly more gung-ho "bring-in the marines/action film" paradigm in Aliens that invests more of its chips in fast cuts (surprisingly fast for its pre-digital cutting days), explosive edits and a higher body count. It was Walter Hill, perhaps cannibalizing some of his own ideas as expressed in his film, Southern Comfort (1981), that had pitched the idea to Cameron for turning Alien II (as it was then called) into a Vietnam analogy that pits a weary military force against a more dangerous, primitive power. Cameron wanted his cast for Colonial Marines to read Robert A. Heinlein's novel Starship Troopers, and encouraged them to tackle their roles like disgruntled Vietnam vets on the tail end of their duty where "technologically advanced soldiers succumb to a technologically inferior but much more determined enemy that they don't know how to fight."

Upping the macho maneuvers originally rubbed Weaver the wrong way, and she protested handling a gun in Aliens due to what Cameron described as her very liberal and nurturing mindset (Video Watchdog Issue 106 even notes that she was contributing to anti-gun legislation at the time), but Cameron turned her around by personally taking her out to a firing range, and there was able to persuade her to adapt a more aggressive role for the sequel. Cameron still makes sure that Ripley's employers, The Company, continue along as the morally bereft motor of mayhem that made it pivotal in the original film. Attentive viewers can see the company's name "Weyland Yutani" (based on some old neighbors that Scott hated) at the bottom of a computer screen during the landing sequence in the first film, and Cameron gives their name slightly more prominent status in the sequel and keeps the expendable Company representative (here played by comedian Paul Reiser) while subverting the use of the android as a manifestation of The Company. Of course, changing killer robots into guardian angels is something Cameron would do again with his own Terminator series, which also made use of a strong female lead and featured Michael Biehn as a would-be protector.

The Alien mythos underwent slight permutations from film-to-film, but it has always managed to revolve around strong maternal forces, both human and alien, and it introduced women as bankable stars for films normally targeted to male audiences. Cameron, quoted in the 1986 Time magazine, might have revealed why he embraces strong female leads when he said "I've been told that it has been proved demographically that 80% of the time, it's women who decide which film to see." Maybe for this reason, the gender politics of the Alien franchise is a serious matter that has even been selected for attack by right-wing groups. Scott DeNicola, writing for Citizen magazine which is put out by Focus on the Family, in his article Hollywood's Hidden Immorality chastises Weaver for being an outspoken champion of abortion rights and adds that "No one would mistake the sci-fi Alien series as pro-family but, when it comes to attacking the pro-life ethic, the most recent installments fall into the `subversive' category." What's odd about this statement is that it's at odds with how much energy Weaver personally invested into having her character, Ripley, be the consummate mother who risks her own life to protect Newt (in Aliens), and later on actually does sacrifice her life to keep from spawning an alien monster. (Give Focus on the Family points for consistency, at least; they don't want abortion for women even if it means killing an alien spawn that could destroy all mankind.)

On the related note of gender politics, Weaver's co-star in Aliens, Bill Paxton, says in the DVD audio commentary of the film that "It's interesting to note that she was nominated for an Academy Award in a genre that the Academy never recognizes; science fiction, fantasy, and horror." Well, almost never, The Exorcist (1973) got a fair shake at it, but it wasn't until The Silence of the Lambs (1991) that a true horror film won an Oscar® for Best Picture and gave kudos to another strong female lead with Jodie Foster.
-- Pablo Kjolseth