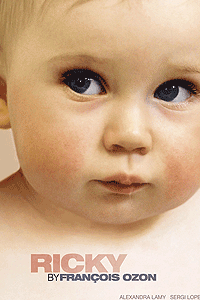 Prolific festival darling François Ozon (Swimming Pool) has been a faint presence on the scene in the last few years, due partly to the inevitable slowing of his Fassbinder-like pace and partly to the unjustified dismissal of his wry 2007 romance Angel, which will finally be released in 2010. Ricky, the first of two Ozon films to debut this year, marks a return to his busy-bee ways, not least because it feels like two disparate movies joined at the hip. (Fair warning: the transition between its two halves hinges on a major plot twist.)

The movie, based on a short story by Rose Tremain, starts out as social realism in the familiar Gallic mode. Alexandra Lamy stars as a cosmetic-plant assembly-line worker with a 7-year-old daughter (Mélusine Mayance) whose father has long since disappeared. A glimpse of dark-eyed co-worker Sergi López is all it takes to start them on an affair that begins with a bathroom-stall tryst but quickly settles into a more domestic mode. Soon, Lamy is pregnant, and gives birth to a chubby baby boy whose arrival strains her relationship with her daughter and her boyfriend.

So far, so kitchen-sink. But the movie takes a huge left turn when the boy begins to sprout strange growths on his shoulder blades, angry red swells that turn to stubs, and then to full-blown wings. Needless to say, the abrupt avian development throws his family for a loop; López splits and Lamy’s nurturing instincts kick in. One of the movie’s more graceful touches is a sequence in which she alters his baby clothes to fit his unique physiognomy.

Intriguingly, Ozon doesn’t alter his style when the substance changes. It’s as if a creature out of David Cronenberg or David Lynch popped up in the middle of a Ken Loach film. The frisson between the two halves is intriguing for a while, but it leaves the film feeling adrift. The material cries out for interpretation, but Ozon keeps his distance, which among other things makes it all but impossible to swallow the rank sentimentalism of the film’s denouement. Of course, the good thing about Ozon getting back up to speed is that his misfires won’t last very long.