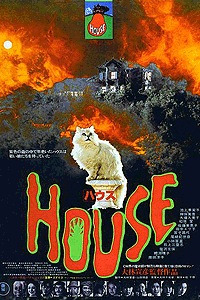 There are four-star films, and there are four-star film experiences. The former tend to generate the latter so long as something like bad projection, talkers, or digestive trouble don't screw it up. Lesser films need a little something to work their way up to being a total blast at the theater. Now, I don't know just how much "Hausu", a screamingly insane Japanese horror film from 1977, requires above and beyond what's there. I suspect it's just a non-stodgy crowd, and when you've got that, look out.

If your knowledge of Japanese horror begins with The Ring or The Grudge, be prepared for a visual smack upside the head. Writer, director, producer, and director of visual effects Nobuhiko Obayashi has given his characters a colorful world in which to play, one which is brightly lit so that there are no shadows for things to jump out of. The world is gloriously artificial, with beautiful matte paintings and over-decorated sets as well as obvious-looking painted landscapes that the camera pulls away from to reveal that those backdrops are free-standing in the midst of fine location scenery. There are animated bits and musical numbers, occasionally in English. The character names are just as artificial, perfect indicators of who they are. We first meet Gorgeous (Kimiko Ikegami) and Fantasy (Kumiko Ohba), two schoolgirls who are best friends but about to spend the summer vacation apart - Gorgeous with her father, Fantasy with their other friends and Togo (Kiyohiko Ozaki), the teacher she has a crush on, at a boarding house where they'll be practicing... well, something. But wait! Gorgeous's father wants to bring a new stepmother along, and Togo's sister won't let them use the house. What shall they do? Why, take a trip to the country home of Gorgeous's invalid Grandmother (Yoko Minamida), and Fantasy, Kung Fu (Miki Jinbo - she's athletic!), Sweet (Masayo Miyako - she's shy!), Melody (Eriko Tanaka - she plays music!), Prof (Ai Matsubara - she wears glasses!), and Mac (Mieko Satoh - she's always eating!) are invited. Oddly, Grandmother seems a lot more energetic once one of the schoolgirls disappears. There's no blueprint for making a cult film, or a "good-bad" movie. What works for this one is that one moment will be shoddy filmmaking, but the next will actually be fairly well-done but completely deranged. And then, every once in a while, there are fleeting moments where you get the sense that maybe Obayashi is up to something clever and you just don't get it. This is a movie where one instant you'll be laughing at how a cat was obviously thrown into a character's lap from off-screen, and then not much later, there's a scene at the piano where you're not quite sure whether to laugh at the absurdity of the scene or get grossed out by it. It's fun stuff. Obayashi's world is crazy, but it's also pretty well-structured enough to be a straight horror movie if that's the way he'd wanted to go with it. Instead, he opts for the crazy. He's got the right kind of cast to make it work - they're young and pretty, not really great actors, but charming; I particularly dug Miki Jinbo's Kung Fu. Yoko Minamida is a hoot as the grandmother as well. And he actually designs some pretty darn good visual effects; they look pretty darn good for a low-budget movie made in 1977. But, really, this is the sort of movie you can't break down to its component pieces. It is absolutely batshit crazy from start to finish, but there's also enough raw talent involved that, believe it or not, the cast and crew actually continued working afterward, many until the present day.

The craziest part? There was a "Janus Films" logo in at the start of the screening, and that's the library that the Criterion Collection often draws from. They need to get on this pronto, just to see if they can make some sort of sense out of it.