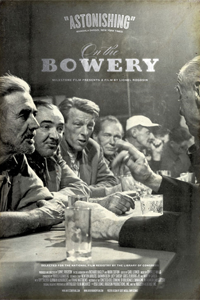 NOTE: Tonight's movie is just over 65 minutes long, so we decided to follow it up with a screening of THE PERFECT TEAM: a 45-minute-long documentary about the making of ON THE BOWERY.

Vividly capturing a vanished New York milieu and a persistent human phenomenon, Lionel Rogosin's landmark, independently produced On the Bowery retains its "semi-documentary" qualifier on mostly academic terms. If other films shot on location with nonprofessional actors meet the standard of soulful nonfiction, few have approached On the Bowery 's achievement: empathy without sentimentality, craft without contrivance, and an unflinching eye that sees individuals striving for dignity to neutralize everyday pain. Beyond mere grit, it catches the joys and camaraderie of a skid-row drinking life as well as the daily bitterness, betrayals, and humiliations. Little wonder that it stoked young John Cassavetes's desire to put raw, messy life on the movie screen (and Rogosin succeeded more completely in this, his first film, than that pioneering actor-auteur did in much of his work).

Infinitely less compromised than the "problem pictures" ostentatiously produced, then and now, by Hollywood, Rogosin and his team entered the Bowery's social realm and produced a fugue on its ignored, isolated population, its stark, beautiful black-and-white images more reminiscent of photojournalism than the newsreel. Though possessing a loose plot concocted by Rogosin with cinematographer Richard Bagley and writer Mark Sufrin, the film's defining strength is its barfly-on-the-wall subjective camera, established in its opening location sequence. Men sprawl in doorways and on curbsides, some filthy, others clad in vests and sweaters that seem inadequate remnants of respectability; a bench-sleeper is rousted, and led into a police wagon with other indigents beneath the tracks of the Third Avenue El. Halting steps, bent fedoras, wobbly tavern habitués on canes and crutches—this vérité montage fixes the setting's character and aura in the first three minutes, before Ray Salyer, a Bowery dweller playing a character with his own name, enters carrying a suitcase, his eyes sharing the view of Rogosin's lens.

For the three days of the narrative, the tall, fortysomething Salyer lingers in the neighborhood gin mills, coming off a stint as a railroad worker in New Jersey, and quickly burning through the cash in his pocket as one drink leads to another, his first bender ending in a sidewalk blackout. He is befriended, after a fashion, by Gorman (Gorman Hendricks), also known as Doc for his claim of a medical degree, a pot-bellied, grizzled fixture on the street who provides fellowship and advice but also absconds with Ray's case to use it as collateral for a couple nights' stay in a flophouse. Gorman is of the Bowery so indelibly he carries a stock of pure survival instinct behind his affable words, and whether he will prove an ally or nemesis to Ray is the closest the scenario comes to providing a cliffhanger. (The cirrhotic Hendricks, Rogosin's primary guide through Bowery life in the pre-production period, suspended his alcohol use during shooting; he died from his first bout afterward, with the filmmaker paying for his burial and dedicating the movie to him.) The third principal, Frank Matthews, is a nautical-capped old-timer who collects rags and cardboard in a pushcart, and assures Gorman of his eventual escape to a South Seas isle. Frank's solemnly stated plan is as remote as an Iceman Cometh pipedream; the only character ever seen outside the neighborhood is Gorman, panhandling shoppers on the midtown avenues.

These weathered, forgotten white men—there are only a few women in their midst, and black males are only glimpsed as Ray's competitors for day labor on trucks—and those in their orbit frequently speak in actorly, theatrical cadences, even in On the Bowery 's most immediate, unstaged moments. When Ray attends a service at the Bowery Mission as the price of sleeping there one night, the superintendent's sermon, imploring the men to escape the fate of "a drunkard's grave," is followed by an elfin staffer reading his nightly riot act of sobriety to those seeking a bed, bath, and shave: "Leave Sneaky Pete outside!" Gorman denies having "penny one" in his pocket, whether he's flush or not, and one rummy shudders at his pal, "You mean you eat while yer drinkin' wine? It's against the law."

The pungent vernacular sounds like bravado, not Runyonesque patter, in the context of the purgatorial, smoke-filled taverns and mean nocturnal streets that the filmmakers immersed themselves in to birth this authentic document of mania and despair. (Bagley's prodigious nightly drinking awed Rogosin and Salyer; he died a few years later of alcoholism at 41.) On the Bowery builds to a frenzied scene envisioned by Rogosin as "Dante's Inferno," a raucous barroom night of clumsy physical skirmishes, finger-pointing, thrust-out jaws, solitary mumbles, accusations, and flirtations, a tour de force by editor Carl Lerner. The brief possibility of sexual comfort offered to Ray by a woman he gets tight with is abruptly dismissed, in an exterior long shot, when he roughly shoves her away, open hand to head. Ending on a very measured note of hope, where one man's departure to begin anew is dismissed by a skeptic with "He'll be back," Rogosin's enduring slice of hard life runs little more than an hour but its grace, humor, and melancholy have the heft of eternal truths.