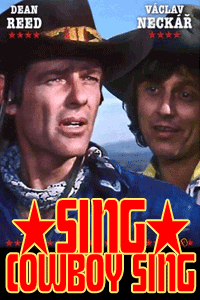 Here's a film that should have special appeal to anyone living in Colorado as its writer, director, and star is none other than Dean Reed. What? You don't know about Dean Reed? He was bigger than Elvis! Well... in Latin America, Russia, and East Germany anyway. Dean Reed was born in Denver, attended the University of Colorado, and later signed a record contract with Capitol Records in 1958. He was groomed to be a teen idol and put out a bunch of popular singles, but where he really caught on fire was on tours of South America.

So he stuck around there and made a bunch of albums and movies and even appeared on the major TV network in Chile and Peru. Living in Chile he being an outspoken critic of oppression and poverty. He also spoke out again nuclear weapons and US foreign policies of aggression. He also put on shows for free in poor neighborhoods and in prisons. Well... you know what that means, if you're hugely popular and basically cleaning the feet of the poor, that either gets you stuck on a cross or, nowadays, labeled as a left-wing, commie and total whacko. In Argentina it was also grounds for deportation. So Dean Reed spent some time in Rome, got some acting gigs in spaghetti westerns, and toured Central and Eastern Europe, where he was a huge hit. In 1973 Reed decided to live in East Germany, and there wrote, directed, and performed in over 20 films and made 13 records.

It's worth noting that Reed never thought of himself as a communist, he defined himself as a Marxist. And although he railed against many American policies he never stopped loving America. Still, there's no denying that after many years of living in exile and being persecuted for his political beliefs he might have gone a bit coo-coo. In 1986 he appeared on 60 MINUTES and defended the Soviet invasion of Afghanistan and even the building of the Berlin Wall. Six weeks later he was dead. Officials in East Berlin ruled it an accidental drowning. His family put quotes around the world "accidental" - they thought he'd been murdered. Some German friends claimed it was suicide. His body was brought back to his native state of Colorado, and he's buried right here in Boulder at the Green Mountain Cemetery. Just look for the grave marked AMERICAN REBEL.

Tonight's film is a rare treat in many ways; not only has it never been screened here in Boulder, but it's also not on VHS. Well... at least not with subtitles. Yes, these singing cowboys are singing in German - so non-German speakers will probably appreciate a little assistance in the translation department. The catch is that there is only one 35mm subtitled print, and it resides at the DEFA Film Library in Amherst, Massachusetts. It's an archival print, so can only screen on reel-to-reel projectors. Multiplexes? They have platters which are notorious for damaging prints. Here at the IFS we have two upright reel-to-reel projectors for exactly this reason: it lets us show you the really cool rare and old stuff that you won't see anywhere else.

The frosting on the cake? It's a free show! Joel Haertling at the The Boulder Public Library Cinema Program was eager to screen this as part of his contribution to the I LOVE BOULDER campaign, so he's picking up the bill for the rental of the film while we here at IFS pick up the tab for the projectionist and the staff.

Don't miss this one-time event! The film screens at 7pm only.