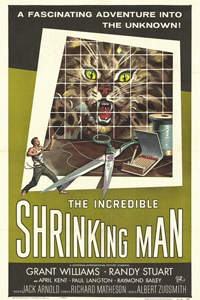 It's incredible that director Jack Arnold ("Creature from the Black Lagoon"/"Tarantula") takes the so-so novel by Richard Matheson and makes it into an absorbing and intelligent pulp gem, one of the best in its genre, with the help of co-writers Richard Alan Simmons and Mr. Matheson (his first script). It still resonates from its Cold War release to the present as a thought-provoking cautionary science fiction venture. The film can be viewed as either making an anti-nuclear statement, presenting a male anxiety fantasy or a philosophical tract on what it means to be a living being.

Loving Los Angeles couple Scott and Louise Carey (Grant Williams) vacation on the yacht of Scott's wealthy businessman brother Charlie (Paul Langton) when a mist covers the boat while the six-footer's tanning himself and she's below; it's suggested that the mysterious mist is made up of atomic nuclear waste. At home Scott discovers he's slowly losing height and weight at a steady clip and worries about his health. But soon becomes perplexed when his loyal wife towers over him leaving him angry and feeling impotent, and furthermore he loses his job forcing him to sell his story to the tabloids to get money to pay the mounting bills. Doctors at the research center believe the cause of this reverse growth pattern is due to the exposure to insecticide and radioactivity and only a new anti-dote can stop it, as Scott now weighs 52 pounds and his height is thirty-six and a half inches. At last Dr. Silver comes up with an experimental anti-dote that is not fully guaranteed, and it for awhile stops the degenerative growth process. Scott, feeling like a freak, has withdrawn from the world but attends a carnival where he meets a midget named Clarice (April Kent), who teaches him to cope with his handicap and that he's capable of living a full life; he then happily resumes writing his memoir. But Scott soon notices he's shrinking again and becomes only two inches in height, as he now lives in a dollhouse. While Scott's wife is out shopping, the family cat attacks him and knocks him down into the cellar. His wife and brother think the cat ate him, after finding pieces of his bloody shirt. Meanwhile Scott tries to survive in the cellar not having the strength to climb out of there and has to battle a spider for survival, as he hopes that his wife will soon find him there.

Warning: spoiler in the next paragraph.

It comes to a surprising mystical payoff that really works very well, as the shrinking man accepts his bitter fate without fear as he continues to shrink into a nothing and exclaims with his last words "I looked up, as if somehow I would grasp the heavens...the universe...worlds beyond number...God's silver tapestry spread across the night. And in that moment, I knew the answer to the riddle of the infinite. I had thought in terms of Man's own limited dimension. I had presumed upon Nature. That existence begins and ends is Man's conception, not Nature's. And I felt my body dwindling, melting, becoming nothing. My fears melted away, and in their place came...acceptance. All this vast majesty of creation - it had to mean something. And then I meant something too. Yes, smaller than the smallest, I meant something too. To God, there is no zero. I STILL EXIST!"