We Live in Public

With Ondi Timoner in person! 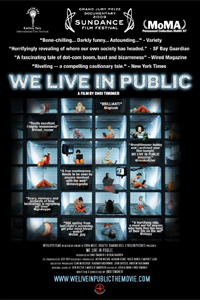 NOTE: We were able to secure a 35mm print for tonight's show!

The '90s will be remembered for a lot of things - grunge, Bill Clinton, the arrival of DVD and the birth of file sharing. But perhaps the biggest impact, culturally, socially, financially, and philosophically, was the rise of the Internet and the empowerment of the Dot.Com Kids. Feisty young entrepreneurs who hoped to revolutionize the new media, these free thinking uber-nerds, blessed with both brains and the chutzpah to re-imagine the burgeoning technological wilderness, took the industry (and NASDAC) by storm. Of the many fiery flash in the pans, none were as noted (and notorious) as Joshua Harris. Earning his first million with the then prescient notion of collecting online statistical data for advertisers and merchants, he soon turned his attention to an equally profound kind of web 'performance art'. With it, Harris invented "reality television", pushed the boundaries of acceptable social experimentation, and destroyed most of his collected commercial clout in the process.

As the subject of Ondi Timoner's fascinating documentary, We Live in Public, viewers learn about his early success, how he built his ragtag information machine into an attempt at reinventing television. The web-based Pseudo offered streaming content as early as 1993, setting the ground rules for most of the online content (both personal and professional) seen today. With the money he made, Harris' next decided to turn the lens on the very audience he was courting. Setting up a bunker like hotel in the basement of a New York building, he installed hundreds of cameras, created a complicated authoritarian social structure that involved interrogation rooms, personality profiles, and self-contained law enforcement. Dubbed "Quiet" many consider it to be the dawn of fact-based POV entertainment.

Others saw Harris himself as a post-modern Andy Warhol, with his Factory consisting of a pod-filled Big Brother controlled kingdom. Perhaps the most telling line of his entire spiel was an actual riff on the famed pop artist's best known mantra. For Harris, people didn't want a mere 15 minutes of fame. They wanted it every single day. And as Timoner - who actually participated in the Quiet experiment - points out, even that wasn't good enough for the multi-millionaire. When he fell in love with Tanya Corrin, he brought his new gal pal into his next online brainstorm. Calling it "We Live in Public", Harris had his New York loft fitted with hundreds of recording devices, cameras located everywhere (including the inside of the toilet bowl). The couple then simply went about their daily existence. There were tensions - his desire to have sex for the viewers being one of them - but at the beginning at least, both were up for the challenge.

Where We Live in Public gets most of its dramatic heft is not in the interpersonal clash between people (though there is plenty of that to go around). No, as the Dot.Com bubble bursts, as hundreds of businesses lose value and tank, Harris' own financial meltdown is recorded daily for everyone to see. One particularly profound moment comes as our hero, sitting on the John, learns that he has no money in the bank. From this point on, We Live in Public turns dark and foreboding. Harris and Tanya fight. Their battles become more intense. She decides she can no longer live like a hamster in a 24 hour a day monitored cage. He abandons his project and simply disappears. Where Harris winds up - in one of three fabulous false endings - is the stuff of legend. As Timoner herself points out, even she can't believe where the story takes us.

There is so much about We Live in Public that is mesmerizing, so much that is both shocking in its statement and knowing in its insight, that it's hard to take in at one sitting. As she did with the music industry masterpiece DiG!, Timoner takes a relatively simple subject and deconstructs the outer layers to show the surreal substance within. Many could look at Harris as nothing more than a high tech con man, a slick huckster working in the human condition vs. ornate Bibles or Florida swampland time shares. His "art projects" today seem like nothing more than wasted YouTube temper tantrums and even with their importance to the progress of the Web, we don't really see how anyone thought they could really be the "future" of entertainment - especially commercially. Granted, Harris was right about the Internet and people's desire for fame. But the "promise" of Pseudo or Quiet is still far from being realized today.

Because Timoner is such an amazing filmmaker, because she understands pacing and documentary plotting better than any other director working today, We Live in Public simply sizzles. We get caught up in Harris' vision, watch as it plays out in all its debauched, deranged ideals. With the access she had - both first hand and in follow-up - we get a better than insider's glance at the entire nu-tech approach. There is a giddiness that's hard to comprehend, mid '90s New Yorkers viewing Harris as some kind of media Messiah. If anything, he comes across as an accidental Marshall McLuhan, a suddenly rich eccentric who could see the self-produced webcam writing on the wall. That it couldn't successfully translate into the mainstream was not Harris' biggest flaw. That he couldn't remove himself from being the center of attention was.

As with any classic example of the genre, We Live in Public raises as many troubling questions as it answers. Why did Harris revert to the weird clown persona "Luvvy" under stress? Why the equally unhinged fascination with Gilligan's Island? Did he really think that something like Quiet or We Live in Public would really generate significant revenue opportunities, or was this merely a case of a crazy man with too much money and too many people saying "Yes". While the saga seems to have a somewhat happy ending, Harris remains an enigma - albeit one we seem to recognize a whole lot easier. Ondi Timoner seems draw to individuals who confuse arrogance with ambition, who are addicted to the process as much as they are their own ego. There is no denying that Joshua Harris had vision. What he saw, and in turn, what he wanted us to see, makes We Live in Public a great cinematic experience.

We Live in Public