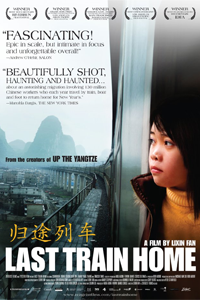 The Canadian-produced documentary Last Train Home idly, even blandly opens with titles superimposed on a massive crush of people informing us that, during the new year festivities, 130 million Chinese workers travel from their jobs in the big cities to their homes in the country - a once-per-year journey that is the largest migration of human beings in the world. This casual observation is the trigger for an extraordinary debut film by Lixin Fan, who serves as director, cinematographer, and co-editor (with Mary Stephen) of a movie that treats upon topics as broad as the dire fate of the Chinese working class in the face of global economics, and as specific and painfully universal as the agony of a mother who fears she has ruined her children's lives. But let me not get ahead of myself.

Fan begins with the widest scale he'll ever explore: the mere fact of the migration, as experienced by a number of people larger than the population of any country in Europe. It's a daunting sight, even in the tiny slice we see of it: a jostling crowd of anonymous faces jockeying for place, being told by a droning loudspeaker that X train is sold out for the day... the next day, the day after that. Our anchors throughout this pandemonium are Chen Suqin and her husband Zhang Changhua, who are nervously counting down the days until it will be too late for them to bother traveling whatsoever, and filling their time in between trips to the ticket office at their factory jobs, assembling pants for the consumption of cheap Westerners.

Eventually, they give up and pay for the premium seats, and find themselves at home, where their daughter Qin and son Yang live with their grandmother. And here we learn that the Zhang family is not without its strains: Qin prays to her grandfather's spirit to guide her, because she finds her parents sort of hateful, thanks to their not-at-all subtle pressuring that she and her brother must be the best students they possibly can; that they have, in effect, decided what kind of life is right for their kids and are pushing them towards it with all haste.

The movie, in its fleeting 85 minutes, explores this dynamic over a span of some two-and-a-half years: beginning in January, 2006, and ending in the late summer of 2008. During that time, Fan's camera captures the Zhangs in a state of gentle, inexorable free-fall, all ultimately descending from the fact that, as Suqin wearily observes in the beginning, she and her husband have never been near their children. Hence the quiet animosity on both sides: the parents want to know that they have, in effect, sacrificed their lives to ensure their children's future, while Qin bristles at taking orders from a man and woman she's seen, all told, for less than one month since she was born. There's more to it than that, of course: the two generations also fall on opposite sides of what appears to be a greater cultural gap in China, between the old people who know only work and toil, and the young people who have enough of a sense of how the shiny global economy that they'd rather wear the jeans than make them.

This is a conflict without villainy on either side, just an intractable difference of understanding that divides a family, and Fan's role is that of an observer, patiently watching without trying to take sides or guide the audience's opinions. And, in turn, he doesn't seem to force himself on the Zhangs, who seem to have quickly grown used to the camera enough that it doesn't bother them to simply live their lives in front of us. There are exceptions: when Qin first sees her parents, she runs out to hug her father, and happens to glance straight into the lens; she reflexively, with obvious embarrassment, steps back and freezes up. It's a short moment that doesn't call much attention to itself, but it's there, a telling mark that the girl, presumably the most media-savvy member of the family, has lingering doubts about exposing herself to the world, a fear her parents do not share. So calmly oblivious are they, in fact, that even in the moments when they're speaking directly to Fan/the audience, they're looking at nothing in particular.

These tiny points of direct engagement with the movie are important, for it is mostly the case that Fan has assembled the movie to play exactly as a fictional narrative would; the editing in the film (done with is eerily unlike any documentary that I, at least, have ever seen. With two cameras at least to work with, the film is full of cross-cutting, insert shots, reverse shots, and everything that goes into making a traditional feature; the better, perhaps, to create art and universality out of a real-life situation. One might with reason suggest that this is exploitative; I didn't find it played that way, and in fact the emphasis on the artistry of the film, rather than its journalism, pays off in spades in a late scene in which Qin and her father have an out-and-out fight, the only moment of explosive conflict in the film. The camera operator (I would imagine it's Fan himself) scurries backwards, bumping into the boom operator, sending the microphone hurling into the frame; a few seconds later, Qin turns to the camera and pissily suggests that this is the "realism" the filmmaker is looking for. It's a startling enough moment, the one scene of pure anger in the film; but coupled with the sudden break in Fan's careful illusion that there is no camera, it's a wrenching moment that reminded me of nothing less than the celebrated moment in Ingmar Bergman's Persona where the film "breaks". In both cases, it is raw, messy, human emotion that overcomes the basic stability of cinema itself; only in Last Train Home is that emotion the actual feeling of an actual, living person.

The terrible fate of the Zhang family is a beautiful, praiseworthy thing all itself; that it comes wrapped in a movie that manages to ask probing questions about the perverse face Chinese capitalism in just a few quick strokes pushes it straight into masterpiece territory. There are shots that briefly imply how the Chinese worker is stripped of both identity and dignity; single lines of dialogue that reminded this American, at least, of the West's complicity in creating the soul-crushing world that leads to thousands of stories just like the Zhangs'; snippets of context that showcase just how pervasive the myth of prosperity is even in a world as grossly devoid of wealth as industrial China. A lesser film would have picked one or two of the themes present in Last Train Home and explored them at length and still not be able to say more in two hours than this film can say in a handful of scenes on the edges. It's uncomfortably powerful and direct in its indictment of an entire way of living that the wealthier parts of the world, even in a crippling worldwide recession, take for granted, even it breaks not just the health and well-being of the workers of China, but their very spirits. Accordingly, having committed itself to what looks like a specific and particular family drama, the film ends with a title dedicating to the lives of all 130 million migrant workers.

And a hell of a dedication it is.