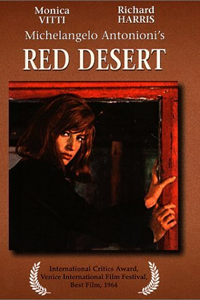 Swoon, ye 21st-century philistines, before the cataract of existential glamour that is Antonioni's Il deserto rosso, its title somehow bereft of its definite article now but returning nevertheless in a new 35mm print just when you forgot how cool modernist despair could be.

As a kind of capper to the white-hot Italian's alienation "trilogy," this famously Technicolor 1964 odyssey finds muse Monica Vitti lost in the supermarket of life, an unstable young mother wandering the fabulously gray industrial wastelands of Ravenna's shipyards and entertaining the seductions of trenchcoated engineer Richard Harris.

Intimations of infection loom (ships pass waving polio quarantine flags) and sexual games are played, but Antonioni was then the most obsessively compositional filmmaker alive, and the movie is all about the scary, foggy, metaphysical negative spaces.

The face of '60s unhappiness, Vitti still fascinates, while Harris, all dimply and young-Dennis-Hopper-ish, seems dropped in by helicopter--but both are subservient to the imagery, which desaturates, beautifully, when the world isn't simply painted neutral, as with the enigmatic grey fruit glimpsed on a vendor's cart (that no one noticed also appeared in Rudolph the Red-Nosed Reindeer that same year) and the mountains of streaming ash that could, if you're of a mind, represent Everything.