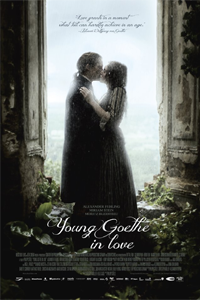 An unexpected treat, the freewheeling German biopic "Young Goethe in Love" isn't much more interested in adhering to the historical record than was "Amadeus" or "Shakespeare in Love," but ... actually, there is no "but." That's merely a fact. Facts are overrated commodities in the matter of cinematic portraiture.

Poet, dramatist, actor-manager, philosopher and scientist Johann Wolfgang von Goethe (1749-1832) spent more than half his life writing and rewriting the great two-part "Faust," which came well after the time frame of director Philipp Stolzl's film. An impudent prologue sets the tone for the picture, written by Christoph Muller, Stolzl and Alexander Dydyna. Played with dash and feeling by Alexander Fehling, young Goethe (not yet in love) is running late, literally running, to his final law school exams. His doctoral defense consists of winging it, improvising, sputtering with a smile. "You should've opened a book now and then," an instructor declares, failing him.

Relocated to a clerking job in a provincial Wetzlar court, Goethe befriends a fellow clerk (Volker Bruch), of similar romantic temperament. At a dance, he meets local resident Lotte Buff (Miriam Stein, a wonderfully natural presence, yet firmly in period) who brings forth the nascent poet in him. They fall together, just before being pulled apart by Lotte's arranged marriage to Goethe's own colleague and mentor, played by Moritz Bleibtreu.

In broad strokes "Young Goethe in Love" explains how and why Goethe came to write "The Sorrows of Young Werther," but you needn't know a thing about Goethe or his works to enjoy the picture. The publication of "Werther," we're told in a delightfully phrased epilogue, set off a run of suicides among the book's more impressionable lovelorn readers. The movie feeds on that sort of youthful ardor, while borrowing an idea or two from "Cyrano de Bergerac." (Unaware they're both smitten by Lotte, Goethe serves as his mentor's unofficial coach in the matter of pitching woo.) Throw in "Amadeus" riffs and some of "Shakespeare in Love's" rollicking energy, and you have a clear set of inspirations.

Yet director Stolzl's film feels all of a piece, and it's far more confident and assured in its technique than Stolzl's previous film, "North Face." Its mixture of lightness and romantic gravity has been cleverly judged. It's not mentioned in the film, but a commonly recycled axiom of Goethe's, relating to the business of assessing creative success or failure, asked the following questions: What was the artist trying to accomplish? How well did he or she accomplish it? And was it worth accomplishing? "Young Goethe in Love" wants only to engage an audience with a capital-R Romantic ideal of Goethe's first love. It does so very well. And it was well worth the effort. Also, the first kiss between Fehling and Stein is exceptionally warm -- the stuff that novels, or poems, are made on.