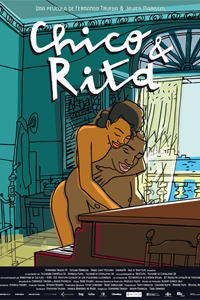 Animation is becoming the rage all over the world. "Toy Story 3" was the biggest hit of the summer. Japan and France have also produced original works. Now Spain joins the derby with "Chico & Rita," the new film from Oscar-winning director Fernando Trueba ("Belle Epoque"), which delighted audiences at Telluride.

In composing this visually hypnotic, musically electric film, Trueba worked with two co-directors: designer Javier Mariscal and animator Tono Errando. Trueba previously directed a documentary, "Calle 54," which focused on Cuban musician Bebo Valdes, and this film is dedicated to him. The picture seems certain to enchant jazz lovers, and it should find an appreciative audience wherever the music has a following.

Trueba and co-writer Ignacio Martinez de Pison invented a story inspired by the real lives of some well known Afro-Cuban musicians but not intended as a biography of any of them. Chico is a piano player who falls hard for an aspiring singer, Rita, in Havana in 1948. Unfortunately, he already has a mistress who fights like a tigress to prevent Rita from usurping her place. Chico and Rita do form a successful musical duo, but their fiery romance erupts, then sputters and dies.

Rita travels to New York and then to Hollywood. Chico follows her but is eventually deported back to Cuba on the eve of the revolution. Decades pass, but the two never forget each other. When a young singer rediscovers Chico, he finally gets a chance to leave the country and return to America. Is it possible that the two lovers who met in the 40s will finally reunite?

If you don't know the answer to that question, you probably haven't seen too many movies. The script is the weakest element in "Chico." The obstacles to the lovers' concerto seem fairly stock; as in many animated features, plot and characterizations are paper-thin.

Fortunately, this flaw is not fatal. After all, there are only a few animated classics that boast truly witty, incisive scripts. We look to these films for their visual delights, and here "Chico" scores a series of triumphs. The design of Havana and New York is often breathtakingly beautiful. One elegant black-and-white panel depicting Central Park in winter is especially memorable.

There's also a stylish homage to Las Vegas, though here the film makes a chronological error, including Caesars Palace in a late-1950s tableau of the Strip. (The hotel was not built until a decade later.) The film also incorporates sly references to many movies of the era, including "On the Town" and "The Wild One." It's a pleasure to surrender to the movie's lush visuals, which are accompanied by wonderful jazz classics performed by Valdes, Estrella Morente, and Freddy Cole (Nat King Cole's brother), among many others.

Some of the scenes between Chico and Rita are frankly sensual, another pleasing novelty in this movie. Though the overall mood is exuberant, the picture achieves genuine pathos as it moves toward its predictable but still satisfying conclusion. ()