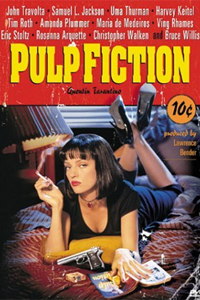 Seventeen years on, Pulp Fiction still works like a motherfucker. It might, indeed, benefit from the shock of its gleeful use of "nigger," the surprise of its sodomy and ultra-violence, and the sheer pleasure of hearing Sam Jackson say those lines and John Travolta dance again in a movie having faded. What's left is this appreciation of a film that is delighted with cinema and experimental without being a jerk about it (very much like Lars Von Trier's Zentropa, specifically in a black-and-white rear-process cab ride with none of that feeling that Tarantino's trying to make a point as opposed to recognizing something that looks cool and feels right)--a film that is Tarantino in all his gawky, hyperactive, movie-geeking, idioglossic splendour, fully-formed and trying only a bit too hard. Beginning life as a proposed portmanteau to be helmed by a trio of directors (à la Tarantino's later, disastrously-received foray into the anthology format, Four Rooms), the picture retains elements of its three-headed inception by intertwining a trilogy of hard-boiled crime stories in a way superior, it's clear now, to Frank Miller's career-long attempts at the same. Tarantino's purer. The stakes for him are simpler. Pulp Fiction is evidence not of someone with something to prove but of an artist entirely, and genuinely, in love with his medium. He loves film enough to push it to be everything. And Pulp Fiction almost gets there.

Vincent (Travolta) and Jules (Jackson) are hitmen in the employ of kingpin Marcellus Wallace (Ving Rhames), the former tasked with bumping off palooka Butch (Bruce Willis), who, lately, has declined to throw his big fight, though he's accepted payment from Wallace to do just that. Butch, meanwhile, plans his escape with girlfriend Fabienne (Maria de Medeiros), while Pumpkin (Tim Roth) and Honey Bunny (Amanda Plummer) plan to rob the late, lamented Santa Monica fixture Holly's Hawthorne Grill. As Pulp Fiction unfolds, we spend a lot of time with Vincent and Jules as they talk about hamburgers, David Carradine's "Kung Fu" (in one of a few eschatological predictors of Kill Bill), and foot massages, presaging an evening where Vincent is tasked with escorting Mia Wallace (Uma Thurman), Marcellus's wife, out to dinner. This leads to a cameo by Steve Bucsemi as Buddy Holly, a five-dollar shake, a dance sequence that cemented for many--myself included--that we were rare witness to canon erecting before our eyes, and a big damn needle. Pulp Fiction is a crime film, a distillation of the ugliest of the genotype from the 1940s and '50s--the kind that Jules Dassin was making before HUAC ran him out of the country. It's Tarantino in his element before moving on to blaxploitation next, kung fu imports with Kill Bill, the drive-in movie with Death Proof, the ensemble war film with Inglourious Basterds, and the Leone western with the upcoming Django Unchained. (Though Leone and the spaghettis are a strongly-felt thread in almost all his work.) When the dust settles, just as the Coens will ultimately be seen as the canniest literary critics of their generation, Tarantino will be seen as the most perceptive, most instinctive film critic of his.

The funny thing is that Pulp Fiction didn't start out as a cult movie, yet that's arguably where it's ended up after garnering critical kudos, big box-office, and an Oscar win for Tarantino and Roger Avary's screenplay, which is remembered in large part for Avary's misinterpreted acceptance-speech joke about needing to pee. If memory serves, no one expected Pulp Fiction to triumph over the two-headed populist monster of Forrest Gump and The Shawshank Redemption (which actually sounds like a single title that's at once not a bad description of either film and also a movie I'd sooner watch than those two again), and Avary, in his awkward way, kinda sorta (speaking of eschatology) predicted the eventual winner. Of course, he was hedging his bets: Each of the other films nominated that year had someone excusing themselves to pee, meaning he may have just been expressing that Pulp Fiction didn't have a chance. It's a king movie-geek moment, understood as such but for the wrong reasons. It was a declaration that the Oscars are bullshit 90% of the time, the years they get it right (like with No Country for Old Men) the glaring exceptions that prove the rule. A statement of amazing naivety that such statements will change a thing, the bigger surprise, ultimately, is that it wasn't Tarantino making the boner.

The film requires an active viewership to follow its fractured timeline, but it doesn't matter if you piece its puzzle together right away because Pulp Fiction isn't a gimmick. What matters is the feeling of it, its rhythms, its sureness about itself. Take the dialogue, ridiculous and sublime, ruminations on what the French call a "Big Mac" not pop-cultural nothings--as they would be in the hands of QT's many imitators--but rather the lovely, melancholy character development of a doomed hitman who makes a wrong choice, reads Modesty Blaise on the can, and is delighted by every little detail of his trip to Europe once upon a time. Easy to dismiss as a one-trick pony, the truth is that while the medium, the genre and its noise, are colours for Tarantino to paint in, no question, the product of his labours is thoroughly original, subtle, even delicate. Consider the cohesion of following the "hamburger conversation" with a scene in an apartment featuring three frightened guys, a Big Kahuna Burger, and the first time Jules quotes scripture (Ezekiel 25:17...sort of), gun in hand. Better, chart the delicious sequence where Butch chooses a weapon with which to dispatch a pair of inexplicable hillbilly pawn-shop rapists, and how the backwards stab of his samurai sword speaks not to Butch's sudden mastery of the Bushido Code and Kendo, but to the catalogue of cultural referents that Butch calls upon to wring every last soupçon of satisfaction from his act of vengeance, as any of us who ever thrilled to a movie like Yojimbo or Lone Wolf and Cub would.

Find here, too, explication of Tarantino's casting choices, from Willis for his spiritual resemblance to Ralph Meeker's asshole hero of Kiss Me Deadly to Travolta for his quality of winsomeness, largely unseen since at least Blow Out if not Saturday Night Fever. They're career resurrections, certainly, not because Tarantino shoves them in front of a camera, but because he understands what it is, specifically, that made them stars in the first place. It's not stunt casting, it's perfect casting. Pulp Fiction, again, see, isn't a gimmick, although it's most often portrayed as such. The only time it stumbles is when Tarantino can't resist giving himself a cameo in his own film as a schlubby suburbanite acquaintance whose garage is requisitioned by Vincent and Jules after a gun goes off and a black kid named Marvin's head is notoriously exploded. It's self-indulgent in a way the rest of the film is not, the isolated moment in the picture where Tarantino's delight turns dorky. The instinct shouldn't be to want to share a frame with Harvey Keitel, Jackson, and Travolta, but he doesn't seem to figure that out until he follows up Pulp Fiction with what might be his best film: Jackie Brown.