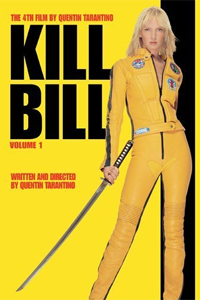 Kill Bill: Vol. 1 is Quentin Tarantino's giddy homage to the movies he grew up with at the grind houses--the Hong Kong chop-sockies and spaghetti Westerns and samurai and blaxploitation flicks. The plot has a direct-action vividness suitable for a video game. Uma Thurman, who has the look of a chiseled android here, plays an ex-member of the elite Deadly Viper Assassination Squad (DIVAS), code name Black Mamba, who is left for dead by them and her ex-lover Bill after they slaughter her wedding party during a dress rehearsal in El Paso. Four years later, rising up out of a coma, Mamba, better known as the Bride, sets out on a mission to systematically eliminate her attackers one by one. This being a Tarantino movie, the dramatic arc, divided into five chapters in highly varying visual styles, is a lot more fractured and back-and-forth than I've made it sound. And because it's Tarantino, the bloodletting is in full flow. It's an homage all right, with extra ketchup.

Heads are severed, arms lopped off, geysers of red spray the screen. And yet it's all in (perverse) good fun. Tarantino has made a killing comedy, and because his film is entirely circumscribed by other movies and a mishmash of source music and pop tunes, it's difficult to get worked into a high dudgeon by the carnage. It's not as if there is anything in Kill Bill that connects to the world of real emotions. It is a video game. It's also a species of live-action anime, and just in case we missed the point, Tarantino himself has directed an extended segment of the film as pure animation in conjunction with a Japanese anime studio.

Actually, there are two moments in this movie when something resembling real feeling emerges. The first is effective: the Bride, who was pregnant at the time of the attack, wakes up from her coma and realizes she lost her baby, and wails. The second is when the Bride kills a Viper, played by Vivica A. Fox, and her 4-year-old daughter walks in on the bloodshed. The girl blankly surveys the scene, and the Bride speaks blankly back to her. The emotional ramifications of this scene are way outside Tarantino's range. At times like these, his anything-to-goose-the-movie aesthetic comes a cropper and he seems no more human than his shock squads.

As it is, poor David Carradine is represented in Vol. 1only by his voice and hands. (He won't show up in the flesh until Volume 2.) But Lucy Liu turns up as white-robed yakuza gang lord O'Ren-Ishii, and the Bride's battles with her black-suited samurai legions, and ultimately with Ishii, are the film's comic-ghastly high points. When these two square off in a moonlit Japanese garden in the snow, the violence, for once, has a hushed grace.

There is no ironic overlay in Tarantino's movies, no "commenting" on the pop schlock he's replicating. He simply wants to remake in his own way the kinds of movies he's always loved, and he's about as uncynical as a movie geek can be. When French New Wave directors like Truffaut and Godard paid tribute to Hollywood pulp, they poeticized it and gave it an infusion of feeling. Tarantino's tributes are, for the most part, far less complicated: He's a fan, and Kill Bill is his mash note.