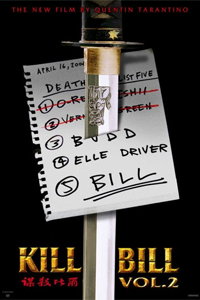 Now that all four hours and eight minutes of Quentin Tarantino's 'Kill Bill' saga have unfurled, it's easy to see the bridge between the two halves. If 'Vol. 1' was about action, 'Vol. 2' is about consequences.

Having indulged in an orgasmic display of sword carnage near the end of the first part, Tarantino knows he can't top himself, and he doesn't try; he slows his pace considerably, drawing out lengthy dialogue sequences, which are really more like duelling monologues. The people in this film feel the need to defend themselves verbally as well as physically; when an enemy is down and helpless, that's the best time for a declamatory speech at his or her expense.

I realize that makes Vol. 2sound leaden, but nothing could be further from the truth. As always in Tarantino's work, character bubbles up from the streams of words. When our wrathful heroine the Bride (Uma Thurman) finally tracks down her nemesis Bill (David Carradine), he favors her with a sprawling theory about superheroes and their secret identities. It's pure Quentin, but it also tells us about Bill and his esteem for the Bride. Bill's ne'er-do-well brother Budd (Michael Madsen) gets the drop on the Bride at one point and prolongs her agony with his own chatter, and later on another assassin, Elle Driver (Daryl Hannah), will do the same to him. The defining Tarantino moment concerns the victim who isn't just killed but is forced to listen, like the unfortunate cop in Reservoir Dogs or the doomed Brett in Pulp Fiction.

Both wit and dread gather around these long exchanges, with sadism and violence never far from the surface. Should Tarantino ever want to make an all-out horror movie, he proves himself capable in a near-unbearable sequence, played mostly in pitch black, in which the Bride is buried alive; for what seems like an eternity, all we get from the darkness is the Bride's terrified gasping and the thunder of dirt being dumped onto her coffin. A close-quarters fight between the Bride and Elle is tremendously vicious, the polar opposite of the elegant spatial harmony of the face-off between the Bride and O-Ren Ishii in the first installment. Though Vol. 2's body count is of necessity smaller than that of its predecessor, the brutality hurts more here, and counts for more.

We get a peek at the Bride's earlier life with Bill, her mentor and lover; we see her training under "the cruel tutelage of Pai Mei" (Gordon Liu), an ancient Chinese master with flowing white hair, beard, and eyebrows. (This character, like Vol. 1's swordmaker Hattori Hanzo, is cheerfully stolen from existing Asian cinema.) David Carradine ambles into the film, carrying a flute and years of associations with martial arts and B-movies. Tarantino obviously worships him, and Carradine rewards him with a portrait of a callous man driven to destroy the one person who broke through his armor. What Carradine brings to Bill, which isn't necessarily scripted, is a becalmed sense of honor. We look at Bill and, despite what he's done, we never think "evil"; he's something else, something larger and harder to pin down, like Hannibal Lecter.

Uma Thurman's performance, too, acquires shadings in this second half. The Bride's pregnancy, her grief and rage at losing her baby, cease to be exploitation plot points and become the basis for a person. There's an interesting little anecdote in which the Bride, having just taken the home pregnancy test, has a run-in with a female assassin, and what follows is just weird enough to be plausible. Mercy is possible here, if not redemption; murderers remain murderers, and even when Budd or Elle express pangs of regret, it doesn't mean they're not who they are. What separates the Bride from the rest of the pack of killers? Well, she chose to nurture life over death. The point is less political than mythical: it's the priestess of violence learning that her body can create as well as destroy.

In total, the 'Kill Bill' movies expand the story far beyond grindhouse-cinema homage. 'Vol. 1' was energetic fun, but 'Vol. 2,' in its digressions and philosophizing, actually has the payoff.