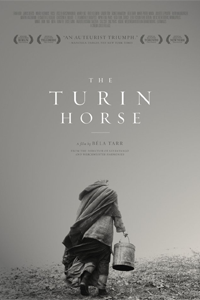 Béla Tarr is the cinema's greatest crafter of total environments and in The Turin Horse, working in his most restricted physical setting since 1984's Almanac of Fall , he (along with co-director Ágnes Hranitzky) dials up one of his most vividly immersive milieus. Excluding one of the director's now-famous virtuoso, film-opening tracking shots, the film is entirely confined to the dilapidated rural spread where a farmer lives with his daughter and the horse he depends on for his livelihood, but in Tarr's hands, the unpromising setting teems with textures and, if not exactly vitality, then an almost tangible sense of presence. The remarkably expressive black-and-white cinematography fixes both the scrubbiness of the exterior terrain and the dankness of the house's interior, while registering with a shock the difference between dim darkness and the occasional burst of exterior light when the door is opened. The sound design, always exquisitely detailed in Tarr's films, is attentive to both the noises squeaked out by quotidian chores and the ever-present wind that howls throughout the film. And Fred Keleman's camera, guided by the director's now legendary, but here less virtuostically showy, tracking shots, guides the viewer through every inch of the terrain, whether it's the natural landscape, the domestic architecture, or the characters' faces.

In fact, it's Tarr's attention to visages that tempers his bleak and sometimes cruel view of humankind's fate, countering cosmic absurdity with human (and equine) brokenness and blind, but vaguely heroic, determination. Whether training his camera on the horseman's bearded, weathered face, his daughter's alternatively worried and deeply sad mien (never more effectively so than in a late, Wavelength -inspired ultra-slow track-in to the fixed point of her head through a window), or the unfathomable eyes of the horse, it's these close-ups that keep the film fixed at the level of individual endurance. In these shots, it's almost as if Tarr is convinced that if he looks long and hard enough at a character's face, he'll penetrate through to some sort of essential meaning, but, for all that, these figures remain as dumb and inscrutable as ever.

The Turin Horse is a cyclical fable of daily drudgery that strips human life to its barest elements and banalities, that tantalizes us with the prospect of a higher meaning only to deny that possibility all together, and then ultimately finds whatever little value is present in humankind's (or animalkind's) existence in the ability to simply carry on. In this most Beckettian of films, the characters endlessly enact the same quotidian tasks over the course of six days, unable to leave their property both because of a windstorm that rages the entire time and because of the horse's stubborn Bartleby-like refusal to not only pull the man's wagon, but even to eat or drink. This defiance on the part of the animal, the result, we're told in an opening monologue, of a severe whipping the animal received from his owner which was viewed by and profoundly affected Friedrich Nietzsche, is at once heroic (he refuses not only to serve, but to receive sustenance from his abusive owner) and a pointedly contrasting example to the tenuously adhered-to routines of his owners.

Samuel Beckett famously ended his trilogy of increasingly abstract novels ( Molloy, Malone Dies, and The Unnameable) with the line "I can't go on, I'll go on." Part admission of defeat and part desperate, if not quite determination, than example of a bare will to endure, the sentence is structured to end on a note, however tenuous, of positivity. In The Turin Horse, a film in which defeated characters act out the process of bare-bones endurance, Beckett's formulation becomes simply "We must eat," the final words spoken by the farmer. But the man's assertion feels hollow, an empty set of ciphers no longer believed, as the characters' determination to carry on has been seriously eroded both by external threat (the storm, a band of menacing gypsies who steal their water) and internal inertia. If the great Irish writer gave us "I can't go on, I'll go on," the Hungarian filmmaker can be said to reverse the emphasis: "I'll go on, I can't go on."

And yet, as we watch man and girl perform the same tasks over and over again, Tarr emphasizes not only the banality of the actions, but a certain, sometimes ironic, grandeur in the simple act of surviving. Every day the pattern repeats. The girl wakes up, goes to the well for water, dresses her father, makes potatoes; the father drinks a few shots of palinka; the pair eat the potatoes, ripping them apart with their bare hands and stuffing them into their mouths; they make futile efforts to rouse the horse; and they settle in for afternoon tasks like sewing and chopping wood. But Tarr shoots some of these scenes as a sort of mock-heroic that nonetheless exudes something of the genuinely heroic. He films, for example, the daughter dressing her haggard father from a low angle in starkly dramatic chiaroscuro, and lets Mihály Vig's rousing strings-and-organs score run free on the soundtrack, a gesture that both mocks and commemorates the baseness of the characters' situation.

And then, again, there are the faces. Because Tarr is essentially shooting the same events over and over, he's able to include a series of alternating views of the various quotidian tasks the characters perform. This cubistic approach announced in the opening sequence, in which the camera tracks alongside the farmer as he rides his horse home, darting around the animal's body to take in different angles, different details, recalls that of his celebrated project, Sátántangó . But whereas the earlier film would repeat an identical scene from a range of viewpoints, The Turin Horse offers up different instances of what amounts to the same activity from a variety of shifting perspectives. In Tarr's latest there are no wild dance parties or cat killings, the focus is on the banal, but, just to take one example, by training in on the faces of first father, then daughter as they eat their potatoes on two consecutive days, the film tells us at least as much about the raw human need for sustenance and the difference between the characters' specific modes of eating, of living, of being, as do the more lavish sequences of Sátántangó .

Ultimately, The Turin Horse is a film that asks what meaning there is to be found in the daily toil, in the quotidian chore. Almost as if to mock this idea of meaning, Tarr includes a sequence mid-film in which a neighbor pops in to beg a glass of palinka and while he's drinking his booze, launches into a lengthy monologue which, with abstractly apocalyptic overtones, attempts to give some significance, any significance, to what he calls the "degradation of humanity." In one of the film's most cruelly comic moments, the father responds to his neighbor's harangue with a simple "Come off it, that's rubbish" at which point the neighbor shrugs, drops a few coins on the table and leaves.

It's almost as if Tarr is dismissing even the possibility of there being any meaning to life, even if that meaning were to be strictly negative. Similarly, a scene of the half-literate daughter slowly sounding out a Bible passage seems to be a wry commentary on the (im)possibility of achieving any kind of higher communion. And yet, whatever value there is in life, the film seems to be suggesting, is not to be found in any cosmic scheme, but simply in humankind's ability to live day by day. By the end of the film, that ability has been severely tested, as the father and daughter lack even the ability to bring (literal) light to their humble abode, but rarely in the cinema have such lives, such tasks been endowed with so much presence, such a sense of exhausted vitality. The characters' lives may be insignificant in any kind of larger scheme, but as they unfold on the screen, they are everything. If ever a film had a claim to being profound in its banality, The Turin Horse is it.