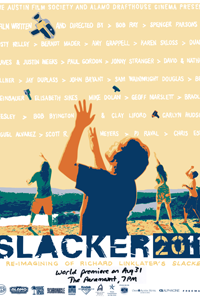 A beery Bob Ray (Hell on Wheels) delivers us into Slacker 2011 on a bus. Armed with a globe and a bag loaded with Lone Star beer, Ray hops onto a pedicab and commences a sprawling monologue to no one and anyone riffing on this and that and everything in between. Ray's character -- fittingly named in the end credits as "Should Have Stayed at the Bus Stop" -- is the first of many to be re-imagined from Richard Linklater's original Slacker (1991).

From Ray's introduction, the narrative baton is passed a total of 22 times from one quintessential Austin filmmaker to the next, including: Spencer Parsons (I'll Come Running), Berndt Mader (Five Time Champion), Amy Grappell (Quadrangle), Karen Skloss (Sunshine), Paul Gordon (The Happy Poet), David Zellner and Nathan Zellner (Goliath), Jay Duplass (Cyrus), John Bryant (The Overlook Brothers), Sam Wainwright Douglas (Citizen Architect), Ben Steinbauer (Winnebago Man), Geoff Marslett (Mars), Bradley Beesley (Sweethearts of the Prison Rodeo), Clay Liford (Wuss), and PJ Raval (Trinidad). That right there is a nice little snapshot of some of my favorite filmmakers -- but, most amazingly, they all reside in Central Texas. Slacker 2011 does many things well; but, most importantly, it serves as a testament to the amazing cinematic talent that currently hails from Austin. And I would not be surprised if a majority of this talent became filmmakers and/or relocated to Austin at least partially because of the original Slacker 's influence.

I want to opt for full-disclosure here. I admit that, despite the talent, I entered the premiere screening of Slacker 2011 at Austin's grandest movie palace -- The Paramount Theatre -- with slight apprehension. I generally hate remakes, especially remakes of landmark films -- and I consider Linklater's Slacker to be one of the high water marks of American independent cinema of the 1990s; at the very least, it was a gateway film for me (and countless others) into a cinematic world that I never knew existed. I can say with absolute certainty that I would not be where I am today if I never saw Slacker.

Nonetheless, Slacker 2011beats the odds and does not suck. In fact, some of the directors truly knock their scenes out of the park -- namely Mader, Marslett and Raval -- taking full ownership of their respective scenes. There are also some really standout acting performances by Bob Ray, Chris Doubek (Lovers of Hate), Jonny Mars (The Happy Poet), Ashley Spillers, Sam Wainwright Douglas, Heather Kafka (Lovers of Hate), Lars Nilsen, Ramsey Wiggins and Paul Soileau (Four Play: San Francisco). But I am not here to play favorites; practically everyone exceeded my expectations with their modern interpretations of Linklater's masterpiece.

Truth be told, my only criticism deals with an admittedly unrealistic expectation: for Slacker 2011to function as a fluid and cohesive whole. But with so many cooks in the kitchen, tying everything together as seamlessly as Linklater's original would be a miraculous feat. Some of the Slacker 2011transitions flow better than others, but for the most part the vignette-styled narrative lacks the sublime fluidity of the 1991 film.

Is Slacker 2011a really great film? I honestly do not know. My critical abilities are not typically hindered or compromised when I review films by Austinites; but being that so many of my favorite Austin filmmakers and actors participated in Slacker 2011, it is difficult for me not to be left a little dazed and confused by the roster of talent in itself...especially after having the opportunity to hang out and chat with so many of them at the Slacker 2011after-party at the Highball.

Slacker 2011succeeds -- if not, exceeds -- in its mission to capture Austin 20 years after Linklater's version; cleverly commenting on how many things have changed, yet so much has stayed the same. We might keep getting older, but Austin continues to stay weird.