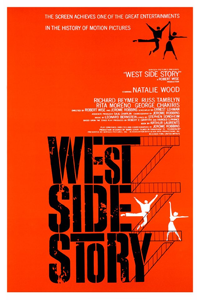 It's the rhythmic snapping that commands attention. People sometimes snicker at the notion of a fight between street gangs expressed through music and dance. But the snapping, laden with tension and the potential for violence, has achieved an iconic status in our popular culture.

Fifty years after its release, West Side Story proves to be a timeless classic. Styles may have changed, but the problems of prejudice, gang violence, and even forbidden love are still with us.

In Fair Verona Manhattan Where We Lay Our Scene

Playwright Arthur Laurents, collaborating with composer Leonard Bernstein and songwriter Stephen Sondheim successfully updated Romeo and Juliet in a modern setting. Despite a three-year run on Broadway, West Side Story failed to capture the imagination of the general public. One bonus documentary on the Blu-ray suggests that people wanted escapism in musicals, not fighting street gangs and violent deaths ("where's Oklahoma when you need it" says Chita Rivera, the original Anita on Broadway).

Perhaps the public was more willing to accept West Side Story as a movie because they were used to seeing gangster movies. Fifty years later, the reasons for the movie's success seem obvious. It is expressive and alive with emotion. Best of all, it was made by talented professionals who put all of their energy into the film.

The Polish-American Jets and the Puerto Rican Sharks are the closest approximation to families in this scenario. The opening sequence, filmed on location in Manhattan, gives a real-world feel to their battle over turf.

Tony, the movie's Romeo, is ready to move on from childish concerns over territory. If there's a Romeo, there must be a Juliet. Maria (Natalie Wood), the sister of the leader of the rival gang, locks eyes with Tony across a crowded room. Neither Beymer nor Wood were trained as dancers or singers, but they are credible as the star-crossed lovers at the center of the story. They certainly lip sync with conviction. Beymer seems a little too happy-go-lucky, and not streetwise enough for a kid who co-founded a gang, but true love can do that to a guy. Wood radiates innocence and naivete as a new girl in America.

The heavy lifting, as far as the dancing goes, is done by rest of the Jets, the Sharks and their girlfriends. As the rival gang leaders, Russ Tamblyn (Riff) and George Chakiris (Bernardo), have plenty of dancing ability and charisma to spare. As Anita, Bernardo's sexy girlfriend, Rita Moreno just about steals the movie.

It's the big musical numbers that give West Side Story its vibrancy. Credit the work of co-director and choreographer Jerome Robbins (who choreographed and directed the play). His perfectionism would get him fired midway through filming, but it pays off in a thoroughly polished finished product.

In a review of the play, one critic amazingly complained that it had no hummable songs. As I work on this review, Tonight and America are fighting for space in my head. But in the end, it's the snapping that stays with me.