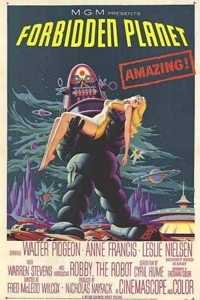 The best of the science-fiction interstellar productions of the 50s lifted its plot and atmosphere from Shakespeare: the magical island of The Tempest becomes the planet Altair-4, where the sky is green and the sand is pink and there are two moons. The magician Prospero becomes the mad scientist Morbius (Walter Pidgeon); Prospero's daughter Miranda, who knows no man except her father, is Altaira (Anne Francis); and (though this is less clear) the sprite Ariel becomes Robby, the friendly robot. Caliban has become a marvellously flamboyant monster out of Freud—pure id. It's a pity the film, directed by Fred Wilcox, didn't lift some of Shakespeare's dialogue: it's hard to believe you're in the heavens when the diction of the hero (Leslie Nielsen) and his spaceshipmates flattens you down to Kansas. (More serviceable than one might suspect, The Tempest in the 40s had been set in a ghost town at the edge of a desert in YELLOW SKY, and with a humor frequently indulged in under cover of the Western genre, Miranda became Anne Baxter's Mike.) — Pauline Kael