The Legend of Alfred Packer

Double feature with Cannibal! The Musical 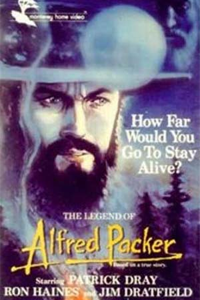 McMurphy (Bleir) comes to Denver, Colorado to see Polly Pry (Nessin) about the Packer case. As Pry leaves for her scheduled meeting with McMurphy, she is stalked and shot at by a gunman. The bullets hit her skirts and lessen the blows inflicted on her publishers behind her.

McMurphy and Pry meet in a tavern to discuss the Packer story over whiskey. She begins with the five prospectors who will become victims meeting up for the first time at a boardinghouse, where the landlady (Ruth Seder) tells them that Alfred Packer is the best guide in the area.

The men find Packer in a small prison, and pay his bail so that he can be their guide. They join together with the larger group, but are soon split up, and they get suckered into the hospitality of a trapper (Morgan) and his sidekick, Weasel (Farrar), who intend to rape George Noon (Dratfield).

Packer and the men escape, but get hopelessly lost in Ute territory. When Packer is scouting ahead, he returns to find that Shannon Wilson Bell (Haines), a Mormon missionary, has killed and begun to eat the other prospectors. Packer and Bell fight; Bell falls, landing on a knife, and is killed.

After several months, Packer comes out of the mountains into the nearest town and makes his report to General Adams (Don Donovan). Later, while at Dolan's Bar, his story having been investigated, he is captured and brought to trial. The remainder of the film depicts his trial. Judge Gerry (Sam Kirbens) reads his sentence as per the court records, though omitting the two consecutive repeats of "dead." As Packer walks through the courthouse door, a blue glow emanates from behind it, the image freezes, and, in voiceover and overlain title cards, Pry briefly summarizes what happened to Packer after the trial.

The Legend of Alfred Packer