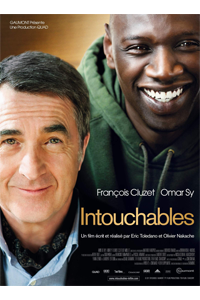 Only a story of such overwhelming emotional resonance could cause a studio to struggle with an adequate cut of its own promotional trailer, one that conveys the film's essence and worth to a wider audience.

This delightful story - of a wealthy French quadriplegic who hires a black man from the ghetto to tend to his every need - may be lumbered with an unsatisfactory trailer, yet the film itself is charming and profoundly moving. It's also, believe it or not, based on real events.

Philippe (Cluzet) is a multimillionaire who requires live-in care. With the help of his attractive assistant, Magalie (Audrey Fleurot), a series of interviews for the position attracts the attention of Driss (Sy) - a cocky lout who merely requires a signature on a form to say he's attended so he can collect his benefit cheque. That is, until Driss's aunt kicks him out on the street, out of her Parisian slum apartment, and he's forced to return to Philippe's, tail between his legs. Much to his surprise, a job offer awaits.

The directors, Eric Toledano and Olivier Nakacheo, stumbled upon the story of Philippe Pozzo di Borgo and his carer, Abdel Sellou, via a documentary on the pair, made in 2004. Over time, as the unlikely carer brought the widower out of his shell, he evidently began to enjoy life again, eventually facing his worst fear: dating another woman, one whom he'd been writing to for some time without declaring his disability (caused by a paragliding accident).

The film opens ominously with a high-speed chase between Driss and police, but it becomes apparent that Philippe is having the ride of his life. Thanks to Driss, he wants to live again. A fact that Cluzet inhabits with the right amount of pathos and restraint. Sy, too, is a delight as the initially stumbling and unsuitable carer, whose advances towards the tough Magalie are an added bonus.

I'm not entirely sure that Driss would be quite so well cut physically, given his impoverished surroundings among Paris's most miserable slums, but that's a minor gripe with an otherwise glorious buddy ride that's so unlikely it could only happen on screen. Only this, of course, really did.

It's rare for a film of this ilk to strike such a perfect blend of tone, style and grace (although if anyone can pull that off, it's the French).

Oscar-nominated, lauded at festivals overseas and now one of the most successful French pictures of all time, The Intouchables is simply irresistible.