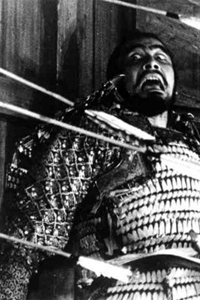 Part of the Spring Into Shakespeare lineup.

Toshiro Mifune and Akira Kurosawa were one of the most famous actor-director combos in film history with a string of 16 films together that are frequently acclaimed as masterpieces. Just think of titles like Seven Samurai (1954), Yojimbo (1961), Hidden Fortress (1958), Sanjuro (1962, all of which are available in a Criterion boxed DVD set called Four Samurai Classics). They even inspired a dual biography, Stuart Galbraith's recent The Emperor and the Wolf. Of all his work, however, there is one that stands apart from the rest - Throne of Blood (1957), a moody, fog-drenched adaptation of Shakespeare's Macbeth set in feudal Japan. Writing about Kurosawa, critic Jonathan Rosenbaum stated that this is "unquestionably one of his finest works--charged with energy, imagination, and, in keeping with the subject, sheer horror."

The story is much the same you may remember from school-time readings of Macbeth or even the Welles film adaptation which Kurosawa tried not to duplicate. However, it's streamlined by clipping many of the long speeches and minor characters (even excluding Macduff, hardly a trivial omission). A samurai (Mifune) is warned of future events by a supernatural encounter and then spurred to seize power by his ambitious wife (Isuzu Yamada, who starred in several Kenji Mizoguchi films including Sisters of the Gion, and Osaka Elegy, both 1936). This includes the murder of his leader, an action that leaves Mifune stricken with guilt and faced with potentially vengeful enemies.

Filmed on the slopes of Mt. Fuji, where Kurosawa constructed a stunning medieval castle and other period sets, Throne of Blood is a stylistically ambitious blending of Noh Theatre techniques and the American Western - and it succeeds brilliantly. Who can forget the climax where Birnam Wood advances on Macbeth's castle or the massive arrow assault on Mifune's wildly flailing body?

In an essay for the Criterion DVD of Throne of Blood, Stephen Prince wrote "Following the Onin War, which lasted from 1467 to 1477 and laid waste to the imperial city of Kyoto, the country entered a prolonged period of turmoil that lasted for a century. This period, the Sengoku Jidai (the Age of the Country at War), was marked by internecine wars among rival clans, the absence of a national political power, and the kind of treachery, prevarication, and murder that Kurosawa dramatizes in Throne of Blood...Kurosawa's radical gesture here is to supplant Shakespeare with the Noh Theatre. Emerging in the 14th century and patronized by samurai lords, Noh was contemporaneous with the age Kurosawa depicts, and therefore he felt that its aesthetic style would furnish the right kind of formal design for the film...The Noh shows up everywhere in Throne of Blood, making the project a real fusion of cinema and theatre and showing just how cinematic theatre can be in the hands of a great filmmaker...As a result, the film has a definite coldness; it keeps the viewer outside the world it depicts. Kurosawa wants us to grasp the lesson, to see the folly of human behavior, rather than to identity or empathize with the characters."

Kurosawa explained this stylistic approach in The Cinema of Akira Kurosawa: The Warrior's Camera (by Stephen Prince): "Drama in the West takes its character from the psychology of men or circumstances; the Noh is different. First of all, the Noh has the mask, and while staring at it, the actor becomes the man whom the mask represents....I showed each of the players a photograph of the mask of the Noh which came closest to the respective role; I told him that the mask was his own part. To Toshiro Mifune who played the part of Taketori Washizu, I showed the mask named Heida. This was the mask of a warrior. In the scene in which Mifune is persuaded by his wife to kill his lord, he created for me just the same life-like expression as the mask did."

When the Oscar nominees for Best Foreign Language Film of 1957 were announced, Throne of Blood wasn't among them (The winner that year was Fellini's Nights of Cabiria) but Kurosawa's film is now considered an undisputed masterpiece; the poet T. S. Elliot cited it as his favorite film and Time magazine proclaimed it "the most brilliant and original attempt ever made to put Shakespeare in pictures."