The Shining: Forwards and Backwards 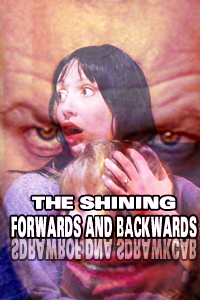 An experimental showing of Kubrick's THE SHINING plays the movie forwards and backwards at the same time on the same screen, creating bizarre juxtapositions and startling synchronicities.

We have evolved to be animals who seek out patterns. The ability to see patterns and understand them has given us the basic science that lifted us out of the caves (although some might argue it was a big black block what did it). That ability has also created in us superstition and religion; while the primitive man learned that rubbing two sticks together would give him fire, he also came to believe that the rain arrived after he danced a certain way and that dancing like that would bring more rain.

Analysis and awe sit side by side in the parts of our brains that engage in pattern recognition. The Shining Forwards And Backwards feeds both of them at once.

Last year some folks at a Brooklyn theater - likely highly stoned folks - got the idea in their heads to play Stanley Kubrick’s The Shining forwards while projecting the movie backwards at the same time on the same screen. What was shocking was that it worked. That’s not to say that Kubrick intended the film to be seen this way, but it worked nonetheless.

The fact that The Shining is a very good movie helps a lot; you listen to the forward moving soundtrack only, so you can actually follow the film as you go (even if you are sometimes visually straining to pick out what exactly you’re supposed to be seeing as the two halves of the film are superimposed on each other). But as the film goes on you begin to get drawn into the surreal, hypnotic interplay of images on screen. And you begin to see that the movie is commenting on itself, playing with its own themes and echoing itself again and again.

In the first half the context is dread. As Jack goes to interview at the Overlook the bloody mayhem from the finale is playing ghostily on screen. Danny looks into the mirror just before blacking out and superimposed in the glass is the image of the bearman going down on a guy in a hotel room. Wendy talks about the one time Jack hurt Danny while Jack’s face pushes through the splintered door. Kubrick already establishes this dread in the regular film, largely through his compositions and the constantly unsettling Wendy Carlos/Rachel Elkind score. But this version really plays that up, makes the movie into something absolutely nightmarish.

The two versions come together in the middle (Dick Halloran laying in bed, watching the news on TV) and then the context flips. The scenes we have just watch now play backwards, a diminishing hope as the film moves to the horror at the end.

This all works because of Kubrick’s fastidious symmetry. The film’s structure comments on itself anyway - scenes of Jack working happen at exactly the same time at the front and back of the movie, surely not a coincidence. Kubrick had to have known that he wanted Jack typing 20 minutes into the film to be mirrored by the reveal of Jack’s work at the 20 minutes to the end mark. Again, I don’t think he wanted us to watch the film like this, but he wanted us to feel the symmetrical echo. There’s almost something fractal in the film’s construction.

And the film’s framing lends itself to this kind of an experiment. Kubrick is so precise about placement within the frame that you can overlay random images and find juxtapositions and reverberations in imagery. Whether or not this is purposeful is besides the point - what matters is how it’s experienced.

It’s possible that you could do  this with any movie and get similar results, but The Shining has one other element that makes it uniquely suited for this kind of a gimmick: the thematics. The film is about being trapped in a place - physically, mentally, paranormally - and so it makes sense that the forwards and backwards version would have ghosts in the frame. The first half of the movie plays as if we have the shining, as if we can see the hidden secrets of the Overlook, and the second half plays as if we are experiencing the fates of the ghosts, of Wendy and Danny and Jack before the hotel got to them.

I walked into The Shining Forwards and Backwards thinking I would give it twenty minutes and move on. Friends had said they felt like it would be better suited to an installation piece, something you could wander by every now and again and see what was happening, what parts were lining up. But it turns out this version of the film is entirely arresting, totally engrossing and beyond exciting. It needs to be watched from beginning to end (and from end to beginning). What’s best about it is that The Shining Forwards and Backwards forces you to engage with the film on levels you wouldn’t otherwise; it really works best if you’ve seen the movie a bunch because it allows you deeper context but also because it forces you to watch the movie with a freshness you likely left behind a dozen viewings ago. You're finding patterns in the chaos, using the oldest parts of your brain, feeling awe and understanding at the same time.

To make a claim that this is how Kubrick intended the film to be experienced is silly. There’s no way that’s the truth. But that doesn’t diminish the strange power of watching The Shining Forwards and Backwards. It’s not a version of the film that plays often, but if it should end up playing anywhere near you, you must seek it out.

The Shining: Forwards and Backwards