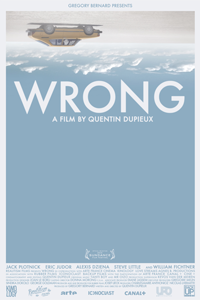 In 2010, Quentin Dupieux took the festival circuit by storm with his absurdist “killer tire” comedy, Rubber. Although sold as merely a film about a tire killing things, Rubber revealed itself to be a smart and scathing commentary of big budget studio films. The film showed that Dupieux was a unique filmmaker who was full of potential.

Through his latest feature, Wrong, Dupieux officially cements himself as one of the most original and daring directors working today. The story revolves around Dolph Springer (Jack Plotnick), a man who wakes up one morning to find his dog Paul missing. Devastated by this seemingly random turn of events, Dolph searches for the dog while struggling to cope with the sadness he feels. To take his mind off things, Dolph calls up a local pizza joint and inadvertently strikes up a conversation with one of the workers, Emma (Alexis Dziena), about the pizza company’s nonsensical logo. Little does he know that this harmless conversation will have big ramifications. As the search for the missing dog continues, Dolph not only encounters a detective (Eastbound and Down’s Steve Little) who has a unique method of connecting with the animal, but also a mysterious new age guru, Master Chang (William Fichtner), who may hold the key to finding his dog.

Wrong is a film that takes great delight in the universe in which all the character exists. It is a world in which the clock rolls to 7:60 am; cops assert their authority by letting you know they could, but won’t do anything; palm trees magically become pine trees; a guy randomly goes around painting cars different colours; and it rains inside the building where Dolph and his co-workers work, but not in their manager’s office. If this all sounds absurd, well it is. However, it is this absurdness that makes it such a special film. Despite the abundance of oddities in the film, Dupieux’s characters function in a deadpan way that fits this world perfectly.

Dolph is so consumed by his unconditional love for his dog that he does not pay close attention to the state of the world around him. He is completely oblivious to the central link he has to the growing situation between Emma and his gardener Victor (Éric Judor). Dolph’s single-minded focus on his dog really plays to great comedic effect whenever he has to deal with Master Chang. In one great scene, after Master Chang has gone on a long-winded philosophical diatribe, Dolph inquires about what happened to his dog to which Master Chang replies “I just told you”. The beauty of this discourse is that Master Chang has indeed told Dolph what happened to the dog, it is just that Dolph has not opened his mind up to the plane in which Master Chang resides. There are several moments like this in Wrong which help to emphasize Dupieux overall commentary on how people give and receive information.

William Fichtner is fantastic in the film as he practically steals every scene he is in. Fichtner does a great job of selling the “you need to lose something in order to truly understand the importance of connecting with that which is lost” style philosophy that Master Chang teaches. Although Master Chang’s methods are questionable, some would even say criminal, Dupieux takes great pleasure in showing how Dolph begins to regain his confidence by using Master Chang’s book on pet love entitled My Life, My Dog, My Strength: Volumes One and Two.

There are so many surreal moments in Wrong that it is bound to turn off some audiences members, especially if they were not fans of Rubber. It is clear though that Quentin Dupieux has no interest in pleasing others. He is proof that you can still make films on your own terms and entertain audiences along the way. In fact it is both commendable and inspiring that a film like Wrong can still be made in today’s box-office obsessed culture. Surreal, brilliant, and filled with both meaningful and meaningless moments, Wrong is one of the most unique film experiences you will ever have. It definitely one of the year’s best films.