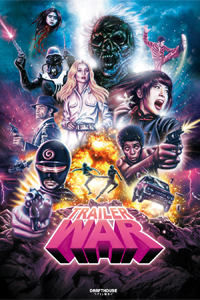 In the two years since its launch, Drafthouse Films has compiled an enjoyably eclectic lineup ranging from the retro-futuristic break-dancing apocalypse comedy The FP to last year’s foreign film Oscar nominee Bullhead. But even by those standards, their latest release Trailer War is a little bit different. It’s not so much a movie as it is a feature-length compilation of trailers — gloriously bizarre, gleefully tasteless vintage trailers from low-budget exploitation flicks, in the vein of the old 42nd Street Forever compilations.

Drafthouse Films is the distribution arm formed by the same folks behind the Alamo Drafthouse Cinema - the group co-sponsoring IFS Thursday night screenings.  The Alamo's partnership with The American Genre Film Archive, which houses over 3,500 rare 35mm prints, was instrumental in bringing this collection to the fore, along with filmmaker Joe Dante.

So sit back and enjoy the craziness being unleashed from the vaults of the Alamo Drafthouse. This is a meticulous selection of the best, strangest and most amazing coming attraction trailers in the world! Most have never been available in any home format, and all are presented for the first time in high definition. From the high flying, explosive metal mayhem of STUNT ROCK to THUNDER COPS’ disembodied flying head chaos, each 3 minute masterpiece is like a beckoning portal to another, more exciting dimension. It’s a crippling overdose of towering flames, mechanized destruction, lurking fear, poor sexual choices and spiritual devastation on an apocalyptic scale. You might want to have a cornea donor standing by just in case…because THIS IS GOING TO BURN!