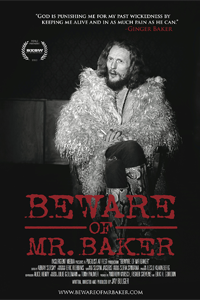 How much one cares about "Beware of Mr. Baker," a semi-biopic about the rock drummer Ginger Baker, will depend on how much one cares about Ginger Baker -- often declared the greatest in rock history, for those who were forgetting Keith Moon, and derided by such true geniuses like jazz great Elvin Jones, for being a product of media hype. Baker's reality actually lies somewhere between; he's a masterfully rhythmic engine of a man whose personal demons and self-indulgences helped sink several very promising musical ensembles, including the fabled Cream, and the one-album supergroup, Blind Faith.

So "Beware of Mr. Baker" (a title inspired by a sign outside Baker's South African compound) is largely a what-if story, although any movie that starts with the subject assaulting the director (Baker smacks plucky first-timer Jay Bulger squarely in the face with his cane) is already ahead of the game. Surveying Baker's fabled career and incorporating interviews with some of the drummer's more famous collaborators and admirers (Cream alums Eric Clapton and Jack Bruce, the Rolling Stones' Charlie Watts, Stewart Copeland of The Police, Mickey Hart of the Grateful Dead), "Beware of Mr. Baker" also provides an overview of a time in rock when men were maniacs, gluten was consumed with abandon and hotel rooms were animal cages.

But as much as the 73-year-old Baker remains a font of outrageous and occasionally vile commentary and behavior, his importance is as a (musician)- something showcased wonderfully by Bulger via the clips of Baker with the late African pop god Fela Kuti, and with various other musicians with whom he played. You may not be able to dance to it, but "Beware of Mr. Baker" has the beat and delivers the goods.